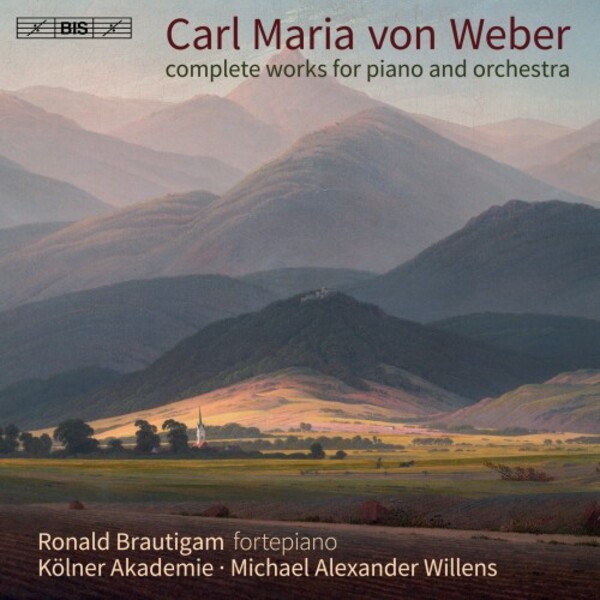 Carl Maria von Weber wrote music that has been admired by composers as diverse as Schumann, Berlioz, Tchaikovsky, Debussy, Ravel and Stravinsky. But in his lifetime he was also recognised as one of the finest pianists of the period, with an exceptional technique and a brilliant gift for improvisation. Especially during the 1810s he toured extensively, and like other composer-pianists he wrote works to use as his personal calling cards, among them the two piano concertos recorded here. They were both composed in 1811-12, but while the First Concerto takes Mozarts concertos as its model, Piano Concerto no.2 looks towards Beethoven. This change of direction was probably influenced by the fact that Weber had acquired a score of Beethovens recently published Emperor Concerto. In any case there are some striking similarities between his concerto and Beethovens: the use of identical keys, and the inclusion of a slow, subtly orchestrated Adagio and a closing playful rondo in 6/8.

Weber is unmistakeably Weber, however: a highly original orchestrator whose music is at turns brilliant, melancholy and charming. These qualities are to the fore also in the Konzertstück from 1821, in which the composer liberates himself from Classical models and finds a new path. Much admired by Liszt, the work is a kind of symphonic poem in four sections, played without a break.

Following highly acclaimed recordings of the complete concertos by Mozart and Beethoven as well as Mendelssohn, this disc brings the team of Ronald Brautigam and Kölner Akademie to the very crossroads of Classicism and Romanticism.

Having already set down all the solo piano music of Haydn, Mozart and Beethoven (no mean achievement in itself), Dutch fortepianist Ronald Brautigam has in recent years formed a highly fruitful partnership with conductor Michael Alexander Willens and his period-instrument Kölner Akademie. Together they have recorded the complete Mozart and Beethoven piano concertos, as well as Mendelssohns music for piano and orchestra. All of which serves as ideal preparation for their latest disc, the complete works for piano and orchestra by one of the key figures in the birth of musical Romanticism: Carl Maria von Weber.

These days Webers name is almost exclusively linked with his opera Der Freischütz, whose importance in the development of German Romantic opera is well-nigh impossible to overstate. His other operas (including Euryanthe and his final work, Oberon) used to be more popular than they are now, and although his clarinet concertos have found a special place in the repertoire, his other non-operatic works are virtually unknown. Of the three works on this disc, the F minor Konzertstück of 1821 again used to be more widely known (it was a particular favourite of Claudio Arrau), while the two piano concertos proper, composed in 1810-12 for Webers own use as a travelling virtuoso before he settled down in Dresden and Der Freischütz made his name, are woefully neglected. Yet, on the evidence of this recording, they deserve a place alongside not just Mendelssohns but also Chopins brace of works in the genre as vehicles for sparkling pianism alongside often abundantly imaginative orchestration that puts Chopin, for one, firmly in the shade. Webers innovative woodwind writing in particular is splendidly highlighted by the Cologne musicians.

As with the other currently available recordings of these pieces, by Benjamin Frith on Naxos and Nikolai Demidenko on Hyperion, this one places the works in chronological order, which allows the listener fully to appreciate Webers steadily growing musical style and confidence. The genial C major Concerto of 1810 owes clear debts to the Mozartian concerto, and in places to Beethoven, too. There are all sorts of benefits to playing it on period instruments, not least the way the wind lines really tell, and the tanginess of orchestral dissonances. Above all, the clarity, transparency and character of the piano itself, a Paul McNulty copy of a Conrad Graf instrument of c.1819 that has become this soloists favoured instrument, combined with Brautigams deft, limpid fingerwork, bring fascinating perspectives to the music. The first movement builds to a fiery climax, while the Finale has a wonderfully dance-like quality and a real spring in its step here, with another brilliant ending. The standout movement, however, is surely the central Adagio, with its striking orchestration for violas, two solo cellos, double bass and horn, which conjures up an unforgettably otherworldly sound, enhanced by Brautigams decision to spread the soloists chords as if musing on some bardic harp.

The Second Concerto was composed after Weber had acquired a copy of Beethovens Emperor Concerto, and Beethovens influence is clearly apparent in not only the works key, but also its tonal organisation: E flat major outer movements framing a central Adagio in B major with partially muted strings (their beauty enhanced by the lack of vibrato and a flowing tempo) and delicate woodwind solos. Here Brautigam plays the opening chords straight, and the movement as a whole, with its wonderful solo filigree, has a magical quality that is completely spellbinding, looking forward in many ways to the fantastic inventiveness of Der Freischütz. The opening Allegro maestoso has a martial flavour, but with plenty of opportunity for Webers trademark parallel thirds in the solo part. The closing Rondo is a rumbustious Presto which finds Brautigam and his musical partners in high spirits. One of its most striking features is the swinging offbeat second subject, which anticipates by some five years the bubbling figuration of Schuberts famous song Die Forelle (The Trout): the period instruments help to emphasise this unexpected Biedermeier association. This is an absolute peach of a performance, in a work that may not have quite the thematic individuality or majesty of Beethovens Emperor, but is every bit as enjoyable.

The F minor Konzertstück occupied Weber on and off for some six years, and its striking four-movement design, with a brief transitional Adagio before the march-like third section, and the whole played without a break, was hugely influential on the development of the Romantic piano concerto (Liszt often programmed it alongside his own concerti). In his booklet notes, Jean-Pascal Vachon argues persuasively that the Konzertstück is in fact the first proper Romantic piano concerto. Weber withheld the programme that helped him compose the work  a lady fears for her knight, away on crusade in the Holy Land, but he eventually returns and love triumphs  and its one that might have made even Bruckner blush. It is arguably better merely to savour the highly original design and sonorities, and of course the remarkable pianistic opportunities afforded to the soloist: they include the famously brief contribution to the otherwise purely orchestral Tempo di marcia, but also the mournful lines and exquisite filigree of the opening Larghetto, the Beethovenian heroics and echoes of Der Freischütz in the Allegro passionato, and the dazzling virtuosity (complete with ebullient glissandi, tumbling cascades and brilliant arpeggiation) of the joyous final section. This is a performance of huge character, and the disc as a whole makes the strongest possible case for all three works, all the more welcome for their comparative rarity even on disc, and fizzing with energy and poetic sensibility from start to finish. Youre left wondering what else Weber might perhaps have achieved in the genre, had he lived beyond the age of just thirty-nine.