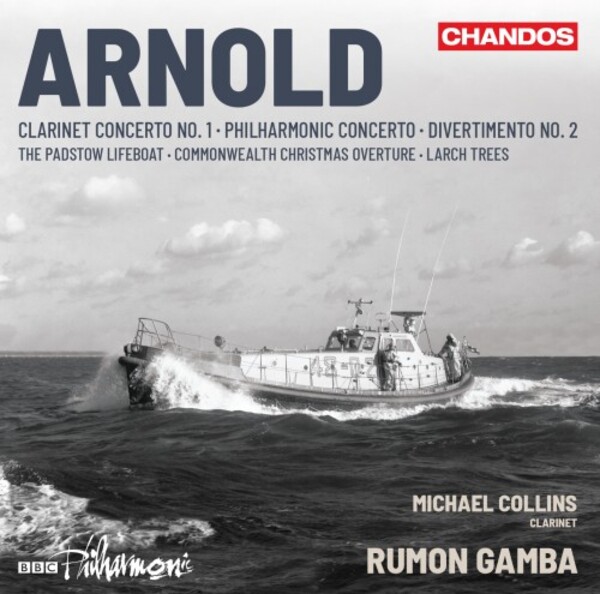 Rumon Gamba leads the BBC Philharmonic in this collection of lesser-known pieces by the British composer Sir Malcolm Arnold. Born in 1921, he was inspired by Louis Armstrong to take up the trumpet at the age of twelve. Following study at the Royal College of Music, in London, he became Principal Trumpet of the London Philharmonic, in 1943  a post he held (bar one season at the BBC Symphony Orchestra) until he moved to composing full time, in 1948. Arnold was active in many genres, writing nine symphonies, two operas, five ballets, and more than 100 film scores, including The Bridge on the River Kwai for which he won an Oscar.
This album features music from across his compositional career, from Larch Trees (1943) to the Philharmonic Concerto (1976)  both works written for the London Philharmonic. His Divertimento was written for the newly formed National Youth Orchestra, whilst the BBC commissioned the Commonwealth Christmas Overture for the twenty-fifth anniversary of King George Vs first Christmas Broadcast, in 1932. The Clarinet Concerto no.1, expertly performed here by Michael Collins, was written for Frederick (Jack) Thurston who gave the première, in 1949, at the Edinburgh Festival. The album concludes with Philip Lanes orchestration of The Padstow Lifeboat, originally composed for brass band to celebrate the launch of a new lifeboat in Padstow in 1968.