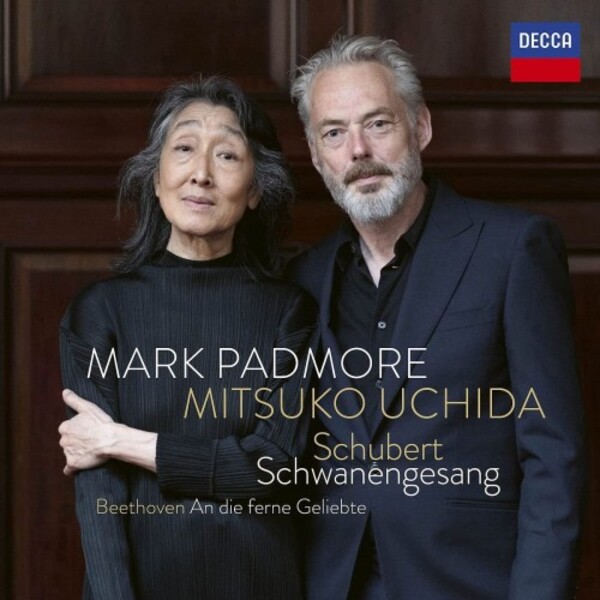 Tenor Mark Padmore and pianist Mitsuko Uchida have received glowing acclaim for their performances of Schubert and Beethoven song repertoire in 2022. Two Schubert masters, wrote the New York Times in a review of their Zankel Hall recital in March, its difficult to avoid superlatives when writing about Mitsuko Uchida and Mark Padmore.

On this new Decca Classics album, Uchida and Padmore appear together on record for the first time in this live recording from Londons Wigmore Hall. They perform Schuberts Schwanengesang (his Swansong, first published weeks after the composers premature death in 1828) and Beethovens only major song cycle An die ferne Geliebte. With a lifetime of experience with this music, Uchida and Padmore are the perfect duo to interpret this magnificent repertoire.

Mark Padmore has established a stellar international career in opera, concert and recital. His extensive discography includes Beethoven Missa Solemnis and Haydn Die Schöpfung with Bernard Haitink and Bavarian Radio Symphony Orchestra on BR Klassik, and Lieder by Beethoven, Haydn and Mozart with Kristian Bezuidenhout for Harmonia Mundi. Other Harmonia Mundi recordings include Schubert cycles with Paul Lewis (Winterreise won the 2010 Gramophone magazine Vocal Award); Schumann Dichterliebe with Kristian Bezuidenhout (2011 Edison Klassiek Award) and Britten Serenade, Nocturne and Finzi Dies Natalis with the Britten Sinfonia (ECHO/Klassik 2013 award).  A recent residency at Wigmore Hall celebrated his relationship with pianists Till Fellner, Imogen Cooper, Mitsuko Uchida and Paul Lewis. Previous residencies have included his time with the Bayerische Rundfunk Orchester and the Berlin Philharmonic Orchestra. In addition, Padmore will be artist in residence at the Oxford Lieder Festival.

Mitsuko Uchida, DBE, has recorded exclusively on Decca Classics and Philips across four decades. Her acclaimed discography, which includes the complete Mozart and Schubert piano sonatas, has earned her two Grammy Awards, a Grammy nomination for her latest album, two Gramophone Awards (including the Piano Award in 2022 for Beethovens Diabelli Variations) and two BBC Music Magazine Awards. She is regarded as a peerless interpreter of the music of the First and Second Viennese Schools.