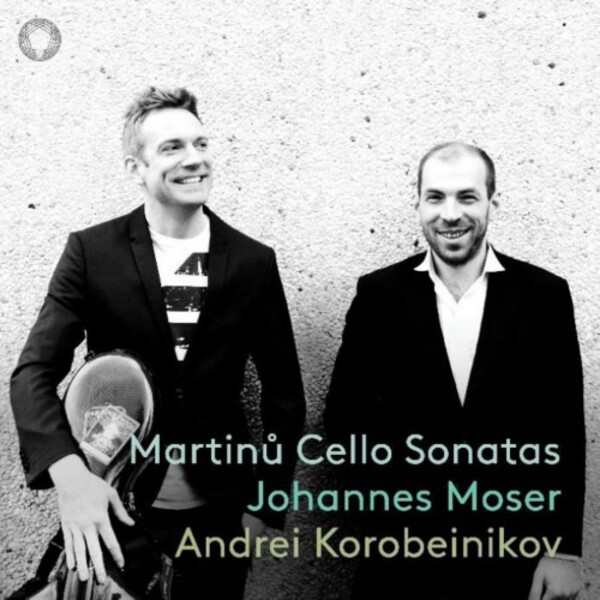 Cellist Johannes Moser and pianist Andrei Korobeinikov present Bohuslav Martinůs complete Cello Sonatas. These works belong to the most significant twentieth-century repertoire for cello and piano. Reflecting Martinůs troubled existence, defined by wartime, emigration, longing for the homeland, yet also full of hope and life-affirming energy, the music seems entirely topical in our own troubled times. After their award-winning recording of works by Prokofiev and Rachmaninov from 2016, Moser and Korobeinikov demonstrate their congeniality once more, fully realizing the extreme interdependence of cello and piano in these works.

Johannes Moser has a vast Pentatone discography, consisting of releases with cello concertos of Dvořák and Lalo (2015), Elgar and Tchaikovsky (2017), Lutosławski and Dutilleux (2018), works for cello and piano by Felix and Fanny Mendelssohn (2019) and Francesco Velázquezs Cello Concerto (2022). His recording of works for cello and piano by Rachmaninov and Prokofiev (2016), performed together with Andrei Korobeinikov, was awarded with a Diapason dor and ECHO Klassik 2017.

Martinůs three cello sonatas, composed between 1939 and 1952, represent the composer at his most personal, written at key moments in his long (and eventually terminal) exile from his native Czechoslovakia. Clearly Martinů was closely attracted to the expressive powers of the cello as a solo instrument. Apart from several other works (including two sets of variations) for cello and piano, he also composed a handful of concertante works for cello and orchestra. On their new recording for Pentatone, cellist Johannes Moser and pianist Andrei Korobeinikov serve the sonatas up neat, without any of the smaller works with which they are often coupled. In doing so, they clearly bring the focus on the sonatas rich expressive world.
For Moser, these works chart a journey through deepest darkness, explosive exuberant expression all the way to hymnal relief and joyous song. The First Sonata was composed in France during the early stages of World War II, and carries the undeniable imprint of those troubled times. The Second dates from two years later, when Martinů was faced with adjusting to a new life in the United States (something which, as with Bartók, did not come easily to him), still yearning for his native Czech soil. The Third Sonata was written in 1952 as Martinů returned to France for the first time since the war, and has a more positive disposition, mixing American, French and Czech elements with a markedly more neoclassical flavour.
For Moser and Korobeinikov, these varied emotional associations were filtered through the lens of the early stages of the recent attack on Ukraine (the album was recorded in the Netherlands in March 2022). This may help to explain why, in each sonatas opening movement, as well as in the central Andante of the Third, they are appreciably slower and more pensive than most other recordings. Certainly Moser is less edgy (in tone and general disposition) than Steven Isserlis in the second of his two recordings (on BIS with Olli Mustonen). Here, the musicians emphasise the brooding qualities of the first two sonatas, the Apollonian side of the music rather than the raw Dionysian elements. But they also find an extraordinary depth in Martinůs music which, on its own terms, is powerfully convincing.
Given such a generally poetic approach, in the Second Sonata (placed first on the disc) the rasping final cello note of the otherwise brooding opening Allegro comes as a genuine shock, like an outburst of deeply-felt rage, or a cry for help. The Largo slow movement is intensely elegiac, with wide-ranging dynamics, even if Moser doesnt find quite the variety of colouring of Isserlis. The corresponding Lento of the First Sonata is even bleaker, especially the pizzicato episode that precedes the final return of the main theme. This creates an effective foil for the vibrant cross-rhythms of the energetic concluding Allegro con brio, lightly sprung by both players in an unforced but irresistibly engaging manner. The Allegro commodo finale of the Second Sonata is similarly infectious, its pull all the more compelling for the measured approach to the first two movements.
Although Korobeinikov stresses the extreme interdependence of cello and piano in this music, the slightly recessed position of the piano in the otherwise admirable sound picture (for example in the long introduction to the Lento of the First Sonata) puts a greater expressive burden on the cellist. Yet there is a general depth of tone  delivered without unwonted forcefulness  that well suits these musicians conception of the pieces. The very opening of the First Sonata may have less rhythmic thrust than on some other recordings, yet the parallels with the opening of the Second are pertinently highlighted.
The radiant B flat major opening of the Third Sonata opens up on a very different expressive world, initially with suggestions of the American landscapes that Martinů had left behind on his first post-war trip to Europe. Things soon take on a more neoclassical hue as the music becomes livelier. This music, written in memory of the Dutch-born cellist Hans Kindler, is essentially sunny in demeanour, as befits Kindlers reportedly optimistic and infectious personality, not least in the urgently driven Allegro vivo that precedes a return to the radiance of the opening and the movements powerful close. The central Andante, with its scherzo-like undertones, has a more reflective side here than in other recordings, but theres a lightness of touch that softens this measured approach; and the closing Allegro has all the liveliness one could wish for, in a sure-paced reading that sets the seal on an unusually affecting hour of music. Complemented by Gavin Plumleys vivid and informative booklet notes, this is a recording that should be heard by all lovers of Martinůs music. Coloured by recent world events, it makes a strong case for the continued potency of these marvellous works.