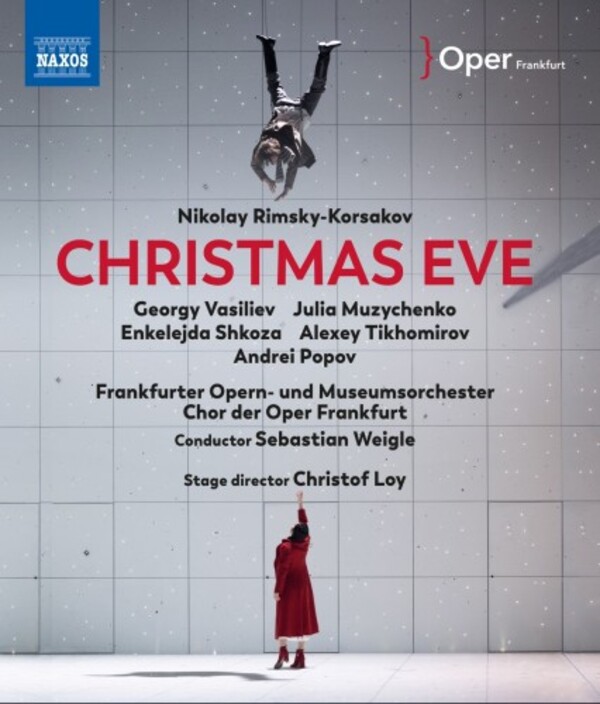 Composed using his own libretto, Nikolay Rimsky-Korsakov created this magical opera based on the short story by Nikolay Gogol The Night before Christmas in which Vakula the handsome blacksmith wants to marry the rich farmers daughter Oksana, who in turn demands that he must first bring her the Tsarinas shoes. Meanwhile a witch on her broomstick gathers the stars and the devil steals the moon  demonic forces trying to hinder this romantic union. There is little repertoire in musical theatre in which enchantment and enlightenment come together so happily as in Rimsky-Korsakovs fairy-tale operas, and this Oper Frankfurt production was considered a perfect seasonal tonic by the Financial Times.

Rimsky-Korsakovs Christmas Eve is best known on recordings in its version as an orchestral suite, but, while there are one or two recordings of the complete opera on album this excellent DVD production stands alone, witness to the surprising rarity of this works appearance in todays opera houses. Released in perfect time for the Christmas season, this opera is considered by musical director Sebastian Weigle to be a great gift in every regard.

Conductor Sebastian Weigle is well known for his numerous acclaimed opera recordings on the OehmsClassics label, while director Christof Loy is one of the most internationally sought-after opera and theatre directors of his generation. In 2016, he won the award for Best New Production for his Peter Grimes at the Theater an den Wien at the International Opera Awards, where he was also named Director of the Year in 2017.