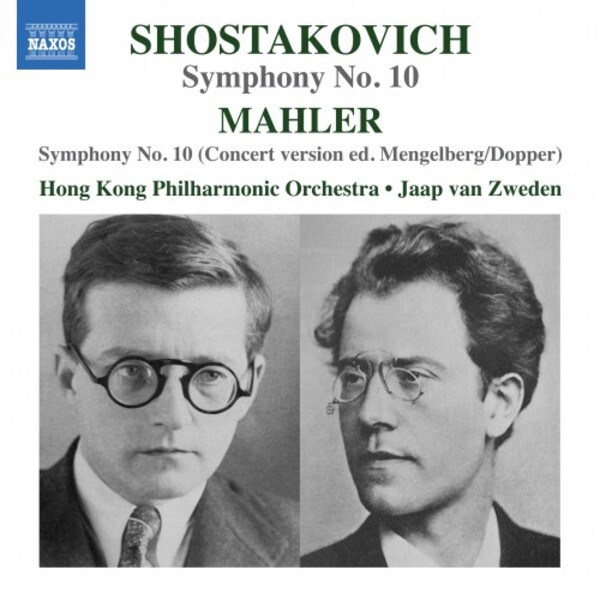 These two Tenth Symphonies represent powerful statements by composers undergoing the greatest of crises in their eventful lives. Gustav Mahlers last and incomplete symphony was kept a secret by his widow Alma for many years after his death, the desperate scrawl of Almschi! on its final page an outburst at her betrayal of their marriage. Shostakovichs intense and deeply symbolic Symphony no.10, considered by many to be his finest, was kept hidden by the composer for fear of Soviet reprisals, and was only performed after Stalins death in 1953.

As far as we know, Mahlers and Shostakovichs Tenth Symphonies are appearing here for the first time together on one disc. This version of Mahlers Tenth is also a premiere, recorded in its earliest incarnation as written in fair copy by Ernst Krenek and adapted by conductor Willem Mengelberg, one of Mahlers most loyal and insightful champions. Shostakovichs Tenth Symphony is justly famous and has been widely recorded but again, collectors will be very keen indeed to hear how it sounds with the fabulous Hong Kong Philharmonic conducted by Jaap van Zweden.

Jaap van Zweden has risen rapidly in the past decade to become one of todays most distinguished conductors. He was named Musical Americas 2012 Conductor of the Year. His cycle of Wagners Der Ring des Nibelungen (Naxos 8501403) with the Hong Kong Philharmonic Orchestra has been critically acclaimed worldwide for its thrilling sense of drama (The Sunday Times, London).

The Hong Kong Philharmonic Orchestra (HK Phil) promotes the work of Hong Kong and Chinese composers through an active commissioning programme, and among its many recordings it has released acclaimed albums featuring Tan Dun and Bright Sheng, each conducting their own compositions, on the Naxos label. They won Gramophones Orchestra of the Year Award in 2019.

Jaap van Zweden began his tenure as music director of the Hong Kong Philharmonic Orchestra in 2012. He has also served as music director of the New York Philharmonic since 2018. Among his numerous recordings is the 2020 release of the world premiere of David Langs prisoner of the state, which followed the 2019 release of Julia Wolfes GRAMMY-nominated Fire in my mouth, both recorded with the New York Philharmonic. In 2018 he completed a four-year project conducting Wagners Ring cycle with the HK Phil, which was released on Naxos. His acclaimed performance of Parsifal earned him the prestigious Edison Award for Best Opera Recording in 2012.