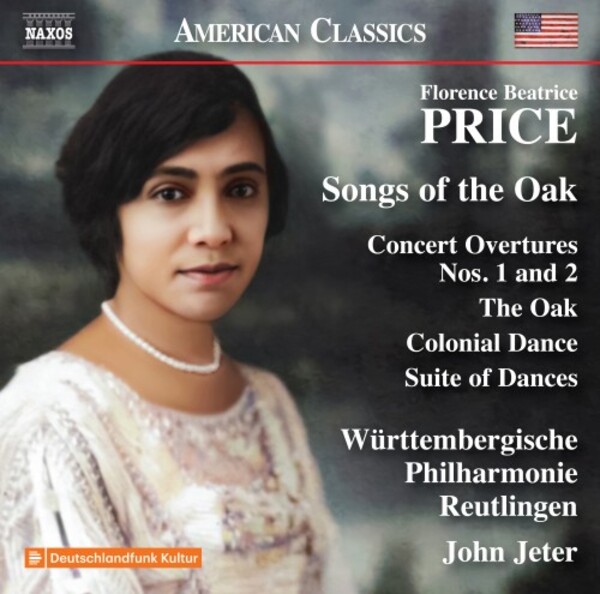 Price - Songs of the Oak, Concert Overtures, The Oak, etc.

The rediscovery of Florence Prices music has revealed one of the most significant bodies of work by an African American composer in the 20th century. The variety of genres represented on this release place Prices immense artistic imagination on full display. The two Concert Overtures explore her engagement with spirituals, both episodically and coloristically, in music that embraces the somber, the poignant and the ebullient. Songs of the Oak is a tour de force of Hollywood-influenced storytelling while The Oak offers a more anxious, ultimately tragic portrait. Prices best-known work is the Suite of Dances  originally for piano it is heard here in the composers full, sumptuous orchestration.

John Jeter has specialised in African American composers for Naxos. Symphony no.3 and The Mississippi River with the Vienna RSO is on 8559897: The result in this recording is not only inspiring but enjoyable, and not only interesting for our times but of splendid and durable quality. The ORF and Jeter provide lively, well balanced and sympathetically played accounts a valuable addition to any library. (BBC Music Magazine)

Symphonies nos. 1 and 4 are on 8559827, where Jeter conducts the Fort Smith Symphony: These are excellent performances  possibly the best I have heard of Florence Prices music. Conductor Jeter has a good feel for it, the Fort Smith Symphony acquits itself in stellar fashion, and the sound is natural. (American Record Guide)

Jeter has also recorded William Grant Stills symphonies on 8559174 (no.1): this Naxos release is a winner, and is very well recorded (Fanfare); 8559676 (nos. 2 and 3): the entire set can be recommended to all fans of American music (MusicWeb International); and 8559603 (nos. 4 and 5) about which Fanfare wrote that William Grant Stills music is a powerful antidepressant  a dose of optimism and an infusion of hope.

The Württembergische Philharmonie Reutlingen was founded in 1945. In 2019 it was awarded the Innovative Orchestra prize by the German Orchestra Foundation for its interactive livestream format NETZ-WERK-ORCHESTER, and the inaugural Federal Prize for Cultural Education (BKM Award) in 2009.

John Jeter has been music director and conductor of the Fort Smith Symphony since 1997. He received the 2012 Governors Award for Individual Artist of the State of Arkansas, the 2002 Helen M. Thompson Award presented by the League of American Orchestras, and the Mayors Achievement Award for services to the City of Fort Smith. His orchestral education programmes have reached up to 10,000 students annually, and he has co-hosted numerous radio programmes and is involved in several radio and television projects concerning classical music. He received his formal education at the University of Hartfords Hartt School of Music and Butler Universitys Jordan College of Fine Arts.