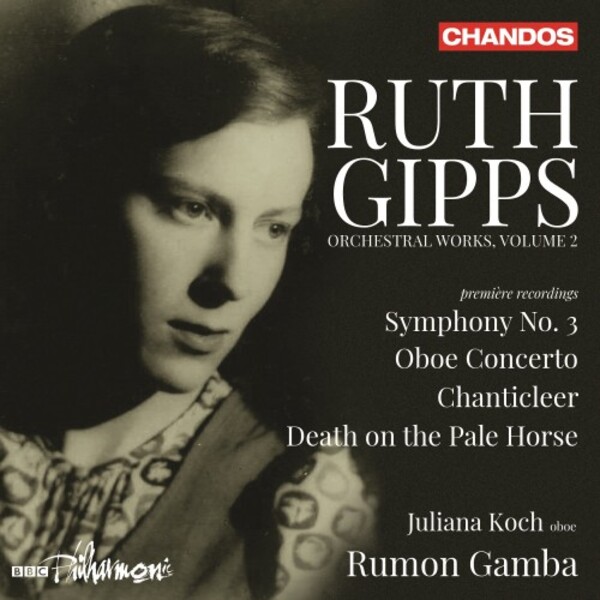 Ruth Gipps (19211999) was born in the English seaside resort of Bexhill-on-Sea. Encouraged as a child by an ambitious pianist mother, she appeared locally as a prodigy pianist. She was accepted by the Royal College of Music in 1937, at the age of sixteen, having won the Caird Scholarship. She quickly matured, both as composer and pianist. She studied with Vaughan Williams and Gordon Jacob, and later the oboe with Leon Goossens. During the Second World War she gained a position as oboist with the City of Birmingham Orchestra and devoted a great deal of her time to composing. Three of the works on this album were composed during the war: the Oboe Concerto, the tone poem Death on the Pale Horse, and the overture Chanticleer (derived from an opera which, sadly, she never completed). The manuscript of the Third Symphony is dated 1 November 1965 and the work was first heard when Gipps introduced it with her London Repertoire Orchestra, on 19 March 1966. Its first professional performance took place on 29 October 1969, Gipps directing the BBC Scottish Orchestra, but it has since gone largely unheard, until now.

Since the first disc of Ruth Gipps's orchestral music from the BBC Philharmonic under Rumon Gamba in 2018, the composer's centenary in 2021 has done much to draw attention to her hitherto neglected output. Born in the seaside town of Bexhill-on-Sea, she first came to attention as a child prodigy at the piano (encouraged by her pianist mother), and in 1937 entered the Royal College of Music, studying with both Gordon Jacob and Vaughan Williams, and subsequently oboe with Leon Goossens. Wartime conditions offered new opportunities for women musicians, and she joined the City of Birmingham Symphony Orchestra as oboist and cor anglais player. Her early orchestral works were programmed by the CBSO's conductor George Weldon, and she also became choirmaster to the orchestra's chorus.
Gipps remained active as oboist and solo pianist until a shoulder injury at the age of 33 curtailed her playing career, after which she concentrated her efforts on composition and conducting. Until relatively recently she was perhaps best known to posterity for her founding of the London Repertoire Orchestra in 1955, and subsequently the Chanticleer Orchestra, the first offering opportunities to young professional musicians, the second championing the works of living composers. From the 1960s she held a string of positions in higher music education.
Gipps's music inhabits the late-Romantic English tradition of her teacher Vaughan Williams, often with wistful pastoral overtones, but displaying a highly individual inventiveness. Three of the four works on this second Chandos volume of her orchestral works date from the wartime years of the 1940s, the earliest being the Oboe Concerto in D minor of 1941. This was composed for her close friend, the oboist Marion Brough, and premiered in June 1942. Lightly scored for an orchestra of strings, double woodwind (minus oboes), two horns and trumpets, it is a subtly varied work, with troubled rhythmic undertows barely ruffling the surface of the substantial first movement.
The Andante slow movement is a dreamy pastoral reverie, the soloist accompanied by muted strings with occasional relief for the soloist from a solo clarinet. The upbeat, dance-like Allegro vivace finale effectively balances the anxieties of the first movement, and includes a brief but wide-ranging and demanding solo cadenza, and the work's closing pages include a delightfully exuberant, throw-away ending. The soloist in this performance is Juliana Koch, principal oboe of the London Symphony Orchestra: her realisation of the solo part is exceptionally vivid, full of rhythmic vitality and tonal character while maintaining the poise that is an essential part of Gipps's musical make-up. From Gamba and the BBC Philharmonic she receives consistently attentive and animated support.
The 1943 tone poem Death on the Pale Horse is based on a William Blake painting, and depicts the figure of War from the four horsemen of the Apocalypse. The martial element is evident from the bugle-like opening horn solo, and from the subsequent contributions of brass and percussion, although the overall impression is more elegiac than warlike. Slower music contrasts most effectively with more animated, violent episodes, and Gamba and his players introduce a note of real menace at the close.
The other wartime work is all that was completed of an operatic project to set Edmond Rostand's play Chanticleer, about a cockerel and other animals in a barnyard. Gipps only completed the music for the overture, subsequently orchestrating it as a self-standing concert piece. It's an engaging work, animated by a lively sense of pulse, and its raucous, throaty opening (the bleat or crow of the farm animals?) would surely have commanded the audience's attention as the houselights dimmed.
In the postwar years, Gipps had to contend with the twin challenges of a still-pervasive sexist bias against the notion of women composers, and the newly resurgent avant garde. Her essentially conservative musical style, coupled with a fierce determination to have her voice heard, found an outlet in her work with orchestras. A full two decades after her first two works in the genre, Gippss Third Symphony is adventurous in scale, with a large percussion section including glockenspiel and celeste, as well as a prominent harp part.
Cast in four movements, it is full of effective instrumental solos alternating with often powerful orchestral tuttis. In contrast to the pastoral style evident in the Oboe Concerto, this symphony is closer to such figures as Bliss, Bax and Arnold. The 'slow' movement is a theme and variations which starts dreamily but has moments of spiky wittiness, while the Scherzo has some quite magical textures, notably the opening idea for harp, flutes and chiming percussion, and a trio for solo violin and viola. The finale, which follows without a break, starts wistfully, but soon acquires a rhythmic propulsiveness. The latter stages of the movement take on a gently mournful hue, with prominent role for bass clarinet, and this vast fugal structure dies away to questioning silence.
Under Gamba, the players of the BBC Philharmonic turn in a magnificent performance of this ambitious work, sensitive to its more reflective aspects while fully alert to its more colourful and rhythmically driven passages. There's outstanding solo work from all sections, and - like the rest of the programme - it's caught in Chandos's excellent sound by producer Mike George and his team. Detailed notes by Lewis Foreman complete the package for this essential addition to the Gipps discography.