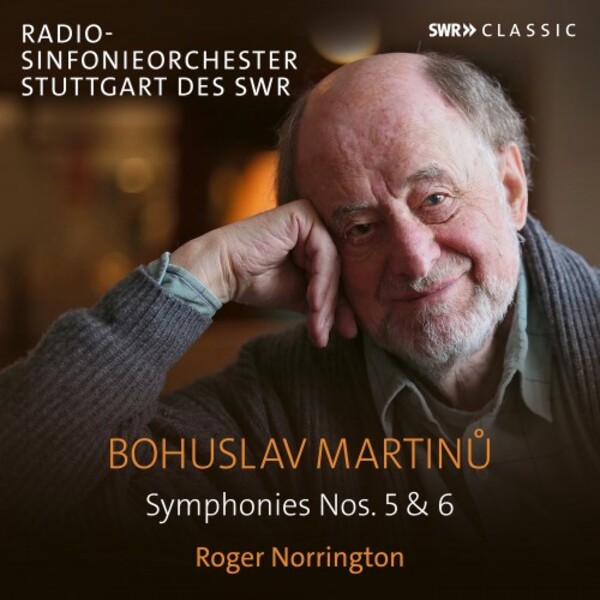 Bohuslav Martinůs six symphonies were composed between 1942 and 1953 during the composers years in America. He completed the first five symphonies at the astonishing rate of one per year, although not at any artistic expense  years later, he described the Fifth Symphony as a well organised, organic, well ordered work in an interview with The New York Times. A full seven years elapsed, however, before Martinů completed his Sixth. One of his unexpected works, it took, quite unusually for him, two years to complete, and its form proved to be a radical change from his previous symphonies. As he wrote to his friend afránek  I am about to create fantasias!

In November 2021 Sir Roger Norrington announced his retirement from conducting. From 1998 to 2011 he was chief conductor of the former Stuttgart Radio Symphony Orchestra (today the SWR Symphonieorchester), and during that time caused an international stir with what came to be known as the Stuttgart Sound  a synthesis of historically-informed performance practice with the technical capabilities of a modern orchestra. Whether Mozart, Haydn, Bruckner, Brahms or Martinů, Norrington sought to recreate a faithful performance experience, adjusting the orchestras size and seating plan, and creating an authentic sound without vibrato.

Recently retired from conducting, Sir Roger Norrington is best known to collectors for his recordings with his London Classical Players (1978-1997), and subsequently for his years at the helm of the Stuttgart Radio Symphony Orchestra, of which he was principal conductor 1998 to 2011, then conductor laureate until it merged in 2016 with the SWR Symphonieorchester Baden-Baden und Freiburg to form the SWR Symphonieorchester. His recorded repertoire has focused on the Austro-German Classical and Romantic repertoires, with the period-informed, vibrato-free Stuttgart Sound attracting particular attention. Despite being most closely associated on disc with such composers as Haydn, Beethoven, Schubert, Brahms, Bruckner and Mahler, Norrington has ventured further into the twentieth century than is sometimes recognised  as recordings of Elgar, Holst and Vaughan Williams testify.
Still, the pair of Martinů symphonies taken from Stuttgart RSO concerts in 2003 and 2008 and now released by SWR Classic comes as a pleasant surprise, even though Norrington has previously ventured into earlier Czech repertoire (Smetana and Dvořák). In fact, like all Martinůs symphonies, the Fifth and Sixth Symphonies date from the composers long exile in the United States. Composed in 1946, the Fifth is the last of the group of five symphonies that were composed at the impressive rate of one a year starting in 1941, and in many ways it is the most assured. While its predecessors were written under the shadow of war and the Nazi occupation of Martinůs homeland, the Fifth was supposed to mark his homecoming. However, following injuries sustained in a fall from a second-floor balcony, Martinů never made it to the works premiere at the second Prague Spring Festival in 1947, given by its dedicatees the Czech Philharmonic Orchestra under the baton of Rafael Kubelík. The 1948 Communist takeover in Czechoslovakia put paid to any thoughts of return for good.
Nevertheless, the Fifth is a joyous work, cast in three movements, whose overall design and sense of formal balance Martinů himself took great pride in. And it responds marvellously well to the lean Stuttgart sound, which allows the pungent wind scoring to emerge without undue forcefulness. String phrasing is often shaped in a classical manner, with notes at the ends of slurs phrased away, allowing the music space to breathe, and highlighting its neoclassical character. More than once in the first movement  with its probing, ominous Adagio introduction and more vibrant, lithe Allegro  the listener is reminded of middle-period Stravinsky, and of Martinůs pre-war years in Paris.
The central Larghetto has elements of a scherzo thanks to its recurring staccato semiquaver figuration, but there are also moments of sliding chromatic mystery that suggest Mahler or Suk in fantastic night-music mode, bold central trumpet calls that recur  cantus firmus style  towards the end, and a haunting violin solo. Here the experience of Norrington and his Stuttgart players in Mahler pays unexpected dividends, and one wonders what they would have made together of Suks Asrael.
In the brooding, tension-building Lento that launches the third movement, the strands of the string writing emerge with wonderful clarity, and the gentle horn vibrato provides a subtle nod to the works dedicatees. The expertly fashioned transition leads to a splendidly spiky, exuberant Allegro in compound time (with palpable shades of the insistent first-movement rhythms from Beethovens Seventh). Although the music of the slow introduction recurs, this simply makes the re-emergence of the Allegro music even more uplifting, though the energetic end is in a forceful minor mode. As in Norringtons studio recordings of earlier repertoire, this performance shines fresh light on the music, although the balance could ideally bring more focus to the piano and percussion.
The account of the Sixth Symphony (later retitled Fantaisies symphoniques) is hardly less impressive. The work itself, dating from a good five years later, and eventually premiered in 1955 by Charles Munch and the Boston Symphony Orchestra, was inspired by Munchs volatile, free-spirited style of conducting. Outwardly the form is similar to that of the Fifth Symphony, but any pretence of formal symphonic logic is negligible. The mysterious murmurings of the slow introduction, subsequently recalled in the scherzo-like second movement, launch a work whose formal organisation is remarkably free, restless and almost rhapsodic at times, although a motto theme (originally from Dvořáks Requiem, but likely taken from its quotation in Asrael) loosely links the three movements. As with the Fifth, the musics agile rhythms are buoyantly articulated by Norrington and his players, and the performance abounds in outstanding sectional solos (among them, bassoons and trumpets in the second movement, clarinets in the third). The darkness-to-light journey of the finale, reaching an eventual calm repose, is most beautifully shaped. Once youve recovered your senses, you are likely to be left wondering what other treasures the SWR archives might hold in store from the Norrington years...