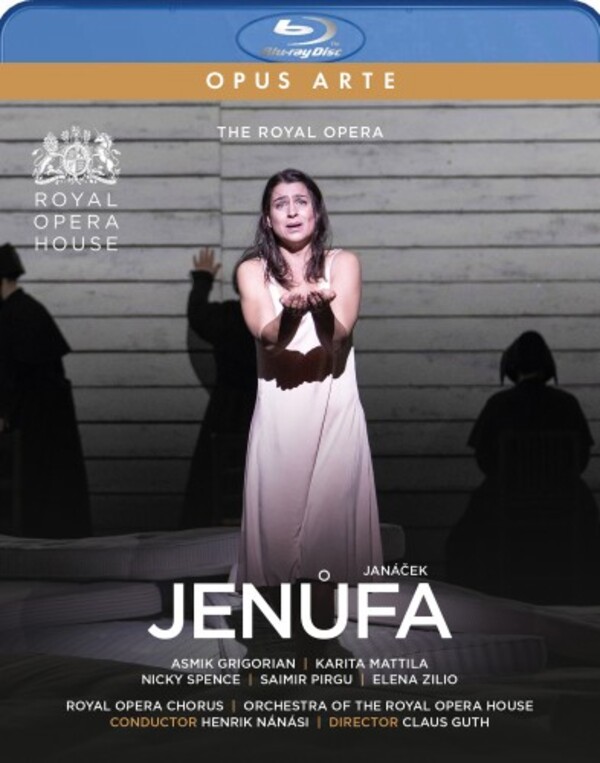 A new production from The Royal Opera starring leading interpreters of Janáček.

Two courageous women struggle for fulfilment against the backdrop of a claustrophobic rural community. With music inspired by the traditional folk melodies of his native Moravia, Janáčeks score movingly captures Jenůfas progression from hope to despair to eventual radiant happiness, while her stepmother, the Kostelnička, is one of operas most complex maternal figures.

Hungarian conductor Henrik Nánási conducts Asmik Grigorian in her much-anticipated Royal Opera House debut in the title role, alongside Karita Mattila as the Kostelnička and a star cast.

In any normal cast Mattilas decay from rigid authority to howling animal, voice flayed down to sinew and rasp, would set her apart, but here shes just the disintegrating centre of a flawless ensemble cast  from Elena Zilios Grandmother, held together by dignity and black velvet, and Nicky Spences profoundly moving Laca, rash and loving and radiantly sung, to Saimir Pirgus strutting Steva... And then theres Asmik Grigorian, the Lithuanian soprano currently dominating every stage she steps onto.  The Independent ★★★★★

Extra features:
- Interviews with the cast and creatives
- Behind the Scenes features
- Cast gallery

Delayed by the Covid pandemic, the Royal Opera Houses first new production of Janáčeks Jenůfa in two decades eventually made it to the stage in September 2021. Judging by the DVD/Blu-ray recording now issued by Opus Arte, and minor caveats apart, it was worth the wait. The production is directed by Claus Guth, his first foray into Janáček, and one which seems to have divided opinion among critics. On the plus side for many, the action takes place in the late 19th century  the period in which the drama itself is set, and also when Janáček began the operas composition. However, instead of keeping the location in the rural Moravian mill community of the original, the setting is more anonymous, suggesting (at least in Act 1) an urban workhouse where everything  even the production of babies  seems to have become semi-industrialised.
Theres certainly a valid point to be made here that the sort of claustrophobia felt in an isolated mill village can be felt under different conditions almost anywhere  and the alienation felt by so many in turn-of-the-century towns and cities has proved fertile ground for artists of Janáčeks time and since. Whether Guths sometimes heavy-handed, Strindbergesque symbolism resonates will be very much down to individual taste. Its at its most laboured in Act 2, where the mute figures of women in black, all wearing Atwoodesque bonnets, are accompanied by a giant raven-headed figure clearly intended to symbolise Death. (The ROHs previous production was dominated by a vast boulder, but at least this had parallels in the operas libretto; a more plausibly Czech avian omen would arguably be an owl.) The dormitory-style beds of Act 1 become a cage in Act 2, in which Jenůfa and her stepmother, the Kostelnička, are imprisoned.
Act 3 is free of such intrusive conceptualisation, and although the dominant hue of the costumes is still a sobre black, theres a generous smattering of folk style and colour (particularly for the delightful village girls chorus) that will please traditionalists. Guths handling of the emotional interactions between the characters is well-observed and finely nuanced, making one regret all the more the rather trendy use of so many extras to emphasise the oppressive situation. In Jenůfa  more than any of Janáčeks later operas  the interrelationships of the characters, and particularly Jenůfa, the Kostelnička, and the half-brothers Laca and teva  are central. Quite literally so in that (according to the libretto at least) they are the only characters on stage in the extraordinary psychological drama of Act 2.
As it turns out, the leading singers are outstanding: Saimir Pirgu is a teva whose drunken arrogance is tempered by an underlying sensitivity, even nobility, which is rare in this role, and he has a ringing voice to match. Nicky Spence looks and sounds the part as the downtrodden, jealous Laca, his immediate remorse after having slashed Jenůfas cheek at the end of Act 1 all too palpable, as are his fundamentally tender feelings for her when he visits the Kostelničkas dwelling in Act 2. (Its a pity that, as elsewhere in this production, theres so little sense of the passing of the seasons which is such an essential part of the unfolding story.)
Best of all, however, are the two female leads. Karita Mattila  herself a memorable Jenůfa in the ROHs previous production  cuts an imposing figure, physically and vocally, as the Kostelnička: good and noble at heart, but driven to a terrible deed as the result of societys moralistic mores. Sometimes her style feels just a tad generic, as on the few occasions when she spits her words out rather than singing them at full value. Her Act 2 scene with teva, when she implores him to accept Jenůfa and the son he has fathered, feels overmilked by conductor Henrik Nánási, and not helped by the camerawork (otherwise so admirable) which cuts away to the raven-figure just at the moment of ultimate intensity. But her solo scene at the middle of the same Act is properly overwhelming, terrifying even, as she confronts the deed which, in her misguided sense of protectiveness for Jenůfa, must be done. Right down to its growling conclusion, this is spine-chilling stuff.
That scene is capped by Jenůfas own solo, as she wakes, dazed from a sleeping dance, to find that her baby has vanished. The whirlwind of emotions explored vocally and in actions is extraordinary here, and Asmik Grigorian in the title role brings an extraordinary complexity, vulnerability and inner strength to the character. As well as having a voice of stunning youthfulness and purity, she can not only act but dance too. From the Act 1 celebrations when teva avoids conscription, to her impassioned remonstrations with him after the Kostelnička puts on hold any plans they have to wed, every glance, frown and gesture is made to count. Its rare to find a singer so completely inhabiting a part as this: never over-emphasised, its full subtlety is brought out by the close-up camerawork of video director Rhodri How. Of the many fine Jenůfas weve seen and heard over the years, Grigorians is the finest.
After the tumultuous drama of the final Act, you really do feel as though youve been on an immense journey with these characters, but that the real journey is only just beginning. Jenůfas self-discovery touches both the Kostelnička and Laca, as well as the audience. Supported by a strong cast in the lesser roles, spirited singing from the Royal Opera Chorus, and generally excellent Czech, this is an ensemble triumph as well as having outstanding central characters. Nánási coaxes some lovely warm sonorities from the orchestra, pacing is generally good, and the woodwind contributions are particularly fine. Video extras are minimal, but the operas the thing. With Grigorian and Mattila now two of the finest singers captured in these roles, no lover of Janáčeks music should be without this recording.