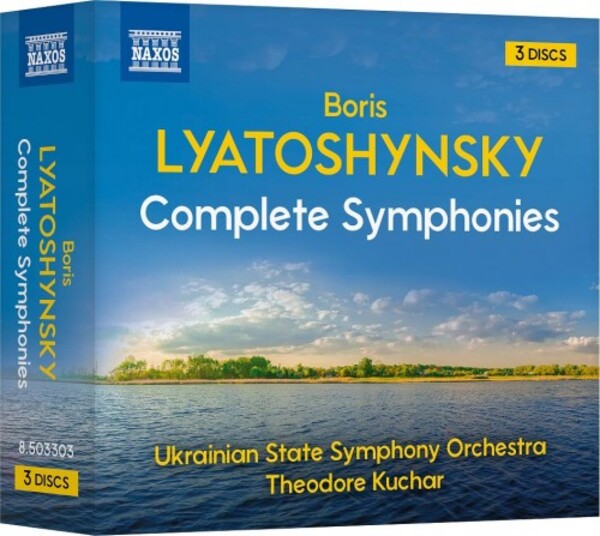 Boris Lyatoshynsky (18951968) was a leading member of the Ukrainian cultural renaissance in the 20th century and his five symphonies remain the most important cycle in his countrys musical history. Although the Romantic and lyrical First Symphony evokes the traditions of Borodin, Glière and Tchaikovsky, Lyatoshynsky soon moved away from Russian models, drawing together Ukrainian folk songs and melodies with contemporary harmonic and formal approaches. His symphonic orchestration was inventive, his themes memorable. The Third Symphony is his most moving and famous, and originally bore the epigraph Peace will defeat war. Also included is his emotionally charged symphonic ballad Grazhyna.

Fanfare also commented about the series: Theodore Kuchar is a conductor of unimpeachable credentials, and unimpeachable music-making as well. He serves this repertoire to perfection with the exquisitely polished Ukrainian State Symphony Orchestra, an ensemble so deftly at one with its leader I would very much like to hear more of this composer.

Conductor Theodore Kuchar has recorded many discs for Naxos and they have been very well received. He has recorded works by Glazunov, Kalinnikov, Mussorgsky, Prokofiev, Shchedrin, Shostakovich and Tchaikovsky, as well as American composers George Antheil, Paul Creston and Roy Harris among others.

Theodore Kuchar, one of the most prolifically recorded conductors of the past decade, appears on over a hundred recordings. He has served as Artistic Director and Principal Conductor of the National Symphony Orchestra of Ukraine from 1994 to 2004. During his tenure, the orchestra made over 80 recordings for the Naxos and Marco Polo labels. The recording of Lyatoshynskys Symphonies nos. 2 and 3 was awarded ABCs Best International Recording of the Year in 1994. Their recording of the complete works for violin and orchestra by Walter Piston (Naxos 8559003) was hailed by Gramophone as Record of the Year in 1999.

The Ukrainian State Symphony Orchestra (now National Symphony Orchestra of Ukraine) was formed in November 1918. The orchestra has given premieres of works by Prokofiev, Shostakovich, Khatchaturian, Boris Lyatoshynsky, Valentin Silvestrov, Myroslav Skoryk and Yevhen Stankovych. The orchestra has made more than 100 recordings, including Ukrainian and international repertoire, winning international awards, and has undertaken concert tours throughout the world.