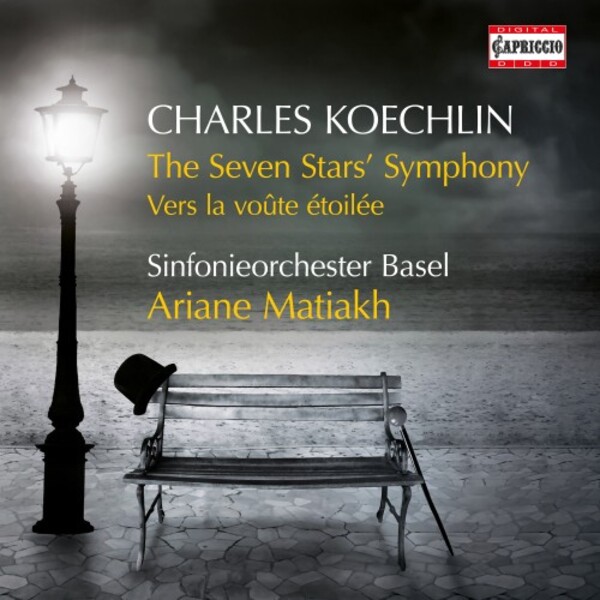 Music by the marvelous, but unjustly underrated composer and Aural Alchemist Charles Koechlin is invariably a real discovery. Koechlin can daub with notes as Seurat daubed with bright pigments on canvas; [he] could, whenever he wished, bathe his music in the impressionist glories of Debussy and Ravel or give it the delicacy of Fauré and then toughen it up with some Roussel-like grinding rhythms (Robert Reilly). He is an impressionist dreamboat. With a title like The Seven Stars Symphony, and following so closely on the heels of the equally enchanting Vers la voûte étoilée (Toward the Vault of the Stars), one might think the work was some spectacular, colourist, celestial bonanza. In fact, its Koechlins ode to his favourite film stars  but no less bewitching for that.

Born in Paris to a rich industrial family of Alsatian origin, Charles Louis Eugène Koechlin (1867-1950) has never received his full due as a composer. In his youth he had ambitions to be an astronomer, while his father intended him for the army; but ill health (tuberculosis) put paid to his studies at the Ecole Polytechnique, and during his convalescence he decided instead to focus his efforts on music. He entered the Paris Conservatoire in 1890, where he studied composition with Massenet and later Fauré, and his fellow students included Enescu, Hahn, Schmitt, Ravel and Ducasse. In 1910, together with Ravel and Schmitt, he was one of the founding members of the Société musicale indépendante, a more progressive organisation for French musicians than the conservative-leaning Société nationale de musique (est. 1871).

In both musical and political terms, Koechlin was a lifelong progressive (if not always a radical), firmly rooted in the musical language of French Impressionism but open to all manner of eclectic influences, albeit with a distinctly Gallic flavour. His political and musical views meant that the sort of permanent teaching post he deserved constantly eluded him, but his informal students included Tailleferre, Désormière and Poulenc. By any measure he was one of the great orchestrators of his age (he produced a four-volume treatise on the subject), and the crowning opus of his vast output was an ambitious choral-orchestral cycle based on Kiplings The Jungle Book. On disc, Koechlins music has been represented only sporadically and patchily, mainly by the chamber music (including much for woodwind instruments) and selected songs, although the complete cycle of solo flute pieces entitled Chants de Nectaire (Nicola Woodward on the Hoxa label) is well worth investigating.

All this makes the new recording of two of Koechlins finest orchestral works particularly welcome. Vers la voûte étoilée (Towards the Starry Vault) is an orchestrated version of a piano nocturne, gorgeously scored and dreamily evocative in this splendidly nuanced performance by the Sinfonieorchester Basel under the expert direction of Ariane Matiakh. A rising star among conductors, with several Capriccio recordings of neglected repertoire to her credit, Matiakh brings out all the Impressionistic colours as well as the musics Fauré-like delicacy; there are shades, too, of the more orchestrally imaginative Russians  Liadov and the Rachmaninov of The Isle of the Dead. Its incredible to learn that, although composed in 1933, this 13-minute jewel had to wait until 1989 for its first performance. The Basel forces and Capriccios recording team at the Stadtcasino Basel do it proud here.

The main work, however, is another 1933 orchestral wonder, The Seven Stars Symphony. Unlike Vers la voûte étoilée, this has nothing to do with Koechlins lifelong fascination with the heavens. Rather its a celebration of seven famous screen performers from the early years of the silver screen. Although Koechlin himself initially disdained silent films because of their often vulgar and demagogic nature, he came to appreciate the spiritual grace [and] the insolent beauty of certain stars. Three of the stars celebrated here  Lilian Harvey (with whom Koechlin was particularly infatuated), Greta Garbo and Marlene Dietrich  successfully managed the transition to the talkies, while the last, Charlie Chaplin, was a cinematic genius whose work transcended such distinctions.

Some of these character portraits evoke the stars in particular films  Douglas Fairbanks Sr in The Thief of Baghdad, Emil Jannings in The Blue Angel (in which he starred alongside Dietrich). Whether this is a true symphony or something more akin to an expanded suite is a moot point, but although it has been recorded a few times before, this new account is the only one in the current catalogue. Matiakh and the Basel orchestra give us a performance that relishes the refinement and the kaleidoscopic variety of Koechlins endlessly imaginative writing. The symphony is scored for a huge orchestra including triple woodwind, up to four trumpets and two tubas, celesta, saxophone and (in the icily aloof Choral païen to Greta Garbo) the then still relatively novel ondes Martenot. Clara Bow provides the work with its lively scherzo, Marlene Dietrich the slow movement (based on the letters of her name).

The Chaplin Finale is a multi-sectioned set of variations with frequent changes of time signature, displaying a compositional virtuosity and range of mood  zany madcap comedy, moments of pathos and reflection  entirely worthy of its subject. At 15 minutes it is comfortably the symphonys longest movement, almost a tone-poem in itself, but it builds to a blazing, triumphant conclusion that could only come at the end of the entire work. This is a piece (and a performance) that deserves a long life in the catalogue, and it makes essential listening for anyone interested in this fascinating figure from French musical history.

The Seven Stars Symphony is composed for huge forces, and the score is a dazzling display of Koechlins orchestral imagination, another reminder that as a master of instrumental colour and texture he had few equals in 20th-century music. ... The Basel Symphony Orchestras performance under Ariane Matiakh has a wonderful lithe elegance, which matches the beauty and refinement of Koechlins writing in every respect.  Andrew Clements
The Guardian 26 May 2022