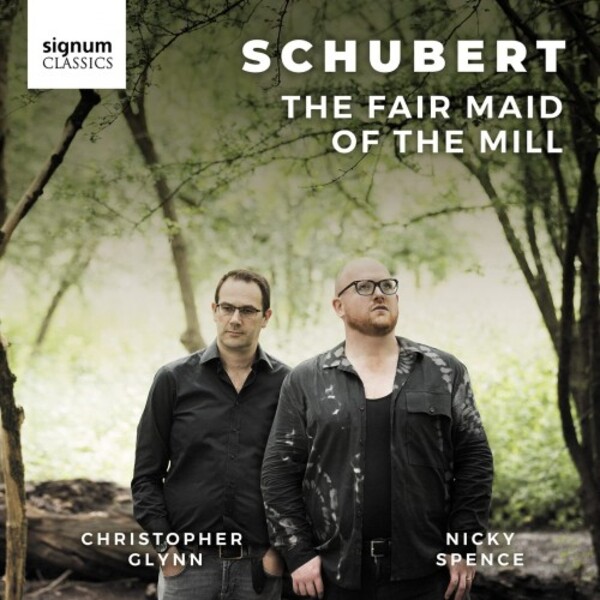 Schubert - The Fair Maid of the Mill

Christopher Glynn continues his series of Schubert in English releases with a new recording of The Fair Maid of the Mill (Die schöne Müllerin) with acclaimed Scottish tenor Nicky Spence.

Set to a new translation by writer and director Jeremy Sams, Willhelm Müllers direct and emotionally charged poetry became the basis of Schuberts first cycle to tell a complete story over the course of its 20 songs.

Nicky Spence is one of Scotlands proudest sons and his unique skills as a singing actor and the rare honesty of his musicianship have earned him a place at the top of the classical music profession.

Nicky won a record contract with Decca records while still studying at the Guildhall School of Music and Drama and then took a place as an inaugural Harewood Artist at the ENO.

Christopher Glynn is a Grammy award-winning pianist, praised for his breathtaking sensitivity (Gramophone), irrepressible energy, wit and finesse (The Guardian) and perfect fusion of voice and piano (BBC Music Magazine).

He is also Artistic Director of the Ryedale Festival, where he has been praised as a visionary and inspired programmer (The Times).

Having previously treated us to Winter Journey with baritone Roderick Williams and Swansong with bass John Tomlinson, pianist Christopher Glynn now completes his traversal of Schuberts great song cycles in Jeremy Samss English singing translations with The Fair Maid of the Mill (aka Die schöne Müllerin). For this instalment he is joined by a tenor who is rapidly becoming one of our most recorded Lieder singers, Nicky Spence, whose recent credits include participation in the complete songs of Samuel Barber (on the Resonus label) and Vaughan Williamss complete folk song settings (Albion Records).

In his engaging booklet notes for this latest Signum release, Glynn writes of English-speaking audiences that Even those who understand German words will not have the same emotional response to it as they do to their mother tongue. And it is the immediacy of communication offered by hearing this cycle in an idiomatic singing translation that is chief among this recordings justifications. Sams, meanwhile, recalls being admonished by his father, the Lied expert Eric Sams (1926-2004) that Operas are story, songs are poetry. But, as Sams junior points out, songs [are] story too; and moreover Schubert wrote this, his first song cycle (and the first by any composer to tell an actual story), in 1823 at the end of a period when he had been heavily involved in operatic activity. The theatrical feel of the work, with its roots in the Berlin salon of August von Stägemann, and then in the uncomplicated emotional directness of Wilhelm Müllers original cycle of poems, is preserved even down to the central song of the cycle, Interval (German: Pause).

Theres a similar directness here to Spences singing and Glynns accompaniments. Spence has just the right amount of youthful earthiness and earnestness  combined with a susceptibility to day-dreaming  to convince as the journeying mill worker. And the feeling of inner energy, however lacking in self-belief and prone to self-doubt, is evident from the outset. The substitution of the words of somewhere for das Wandern may lack the active component of a closer noun such as wandering, but Samss translation consciously links this opening song, with its suggestion of mill-stream crashing over mill-wheel, with later somewheres in West Side Story and The Wizard of Oz.

As the story progresses through infatuation and delusion, with the miller lad falling for the Fair Maid of the Mill, Spence draws on all his tonal resources to explore the inner tumult of the protagonist, at times taking on a distinct baritonal hue, lending an ominous edge to some of the darker-coloured songs, and pointing up bold contrasts between and even within individual numbers. Theres a hint of strain in the upper range in The Millers flowers, but thats a small price to pay for singing of such whispered delicacy; and theres a tangible emotional exuberance to the following Mine!. Glynns accompaniments, like Spences singing, are constantly alive to the images of the texts in Samss translations.

It is in the cycles second part, with the protagonists fixation on the colour green, the emergence of a love rival in the figure of the huntsman, and our heros final descent towards an early death, that this performance really shows its strengths. The patter song element of The Huntsman has rarely been so evident or so brilliantly conveyed, while Jealousy and Pride (as Eifersucht und Stolz here becomes) is marvellously turbulent. The double-sided reflections on the colour green, in the delusional Her favourite colour and scornful The hated colour, are Jekyll-and-Hyde complements, with an emotional and dynamic range to match.

And then the final three songs  Withered Flowers, The Miller and the Brook and The Brook sings a Lullaby  are suffused with a tragic bitterness to rival any one might encounter on the operatic stage, but with all the intimacy that a Lieder setting can offer, with the sustained, caressing inwardness of the closing number magically conveyed. Intimacy and immediacy, then, are the hallmarks of this recording, arguably the most successful of the three Schubert cycles that Glynn has given us on Signum. Spences singing will be enough incentive for many to hear this disc, but his partnership with Glynn is constantly rewarding, and Samss translations  faithful to the spirit of Müllers poems even where they depart from a literal rendering  are a splendid achievement in themselves. They bring the English-speaking listener closer than ever to the extraordinary expressive journey of one of the 19th centurys great song cycles.