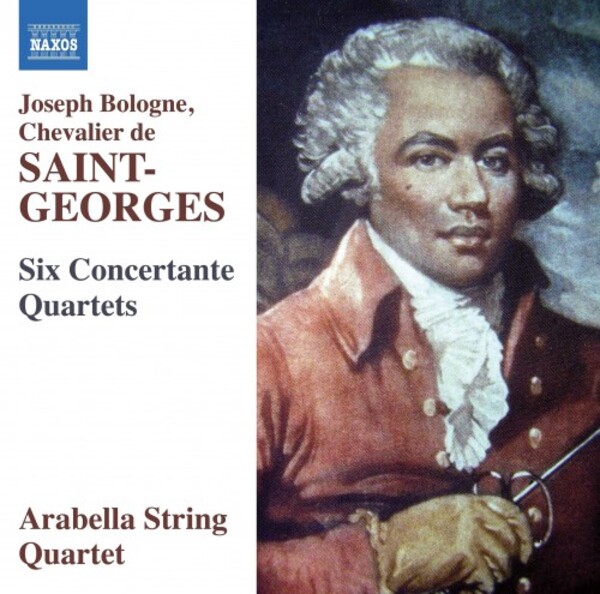 A brilliant swordsman, athlete, violin virtuoso and composer, Joseph Bologne, Chevalier de Saint-Georges might well lay claim to being the most talented figure in an age of remarkable individuals. The string quartet was still in its infancy in France in the 1770s, but while these pieces are small in scale they are exceptionally rewarding. Saint-Georges appreciated the intimate nature of this genre, avoiding overt soloistic virtuosity and exploring chamber music timbres, amply demonstrating his rich lyrical gifts and a natural ability to delight performers and audiences alike.

Saint-Georges is best remembered today as the first known classical composer of African ancestry. His remarkably fine music has however received scant attention in recordings, and this new recording of the Six Quartetto concertans is part of our aim to redress this imbalance. When people are made aware of his work it is always warmly received.

His violin concertos are represented by two Naxos releases, volume 1 (8555040) of which provided a strong recommendation for the Chevalierʼs finely crafted music for ClassicsToday.com, and volume 2 (8557322) representing captivating performances of inexplicably neglected repertoire that would come highly recommended at three times the price (The Strad).

These have been followed by the Symphonies Concertantes (8574306) released in September 2021 and admired for their grace and vigour by BBC Music Magazine, as well as for performances [that] are joyous and enthusiastic, revealing commitment to this music (MusicWeb International ).

There are hardly any recordings of Saint-Georgess string quartets in the catalogue. This new release with the Arabella String Quartet need have no fear from any realistic competition.

The scores and parts of Saint-Georgesʼ Six Quartetto concertans, among other works, are available on Artaria.com.

The members of the Arabella String Quartet hail from around the globe, first meeting at Yale University in 2011. The quartet gave its debut concert in Boston in 2012, and in recent seasons has performed across the US at Charleston Music Fest, Chelsea Music Festival, the Hammond Performing Arts Series, Temple Emanuel Chamber Series, the Alton C. Bynum Recital Series, Mistral Music and the Cosmos Club and Chamber Music Kenwood society series. The Arabella Quartets debut album, In the Moment (Naxos 8579013), is an innovative programme that explores time, place and mood through a series of short pieces. It was named Album of the Week by Classic FM, and critically acclaimed in The Strad.