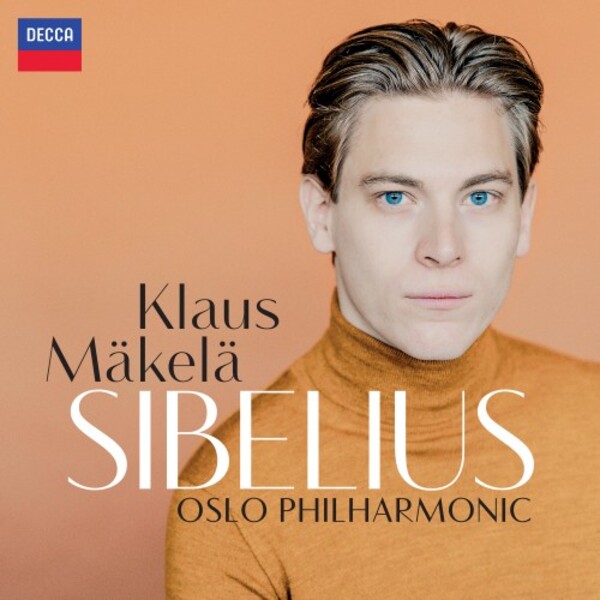 Decca Classics releases Finnish conductor Klaus Mäkeläs debut album Sibelius, a complete cycle of the Jean Sibeliuss symphonies, plus the tone poem Tapiola and 3 Late Fragments. Mäkelä, who recently became the first conductor to sign to Decca since Riccardo Chailly, directs the Oslo Philharmonic, an orchestra with a deep, historic connection to the music of the Finnish composer.

The project began as a nine-month exploration of the Sibelius symphonies to mark Mäkeläs inaugural season with the Oslo Philharmonic as Chief Conductor but, with Covid cancellations, turned into a completely immersive recording project. With the orchestral season disrupted, Mäkelä and the orchestra devoted much of the Spring of 2021 to playing nothing but the music of Sibelius.

The Oslo Philharmonic has been performing the music of Jean Sibelius for over 100 years, with the composer himself conducting three concerts of his music in 1921. Mäkelä taps into the orchestras rich tradition of interpreting Sibeliuss symphonic works in the century since. He refers to the darkness, power and strength in the ensembles string playing, drawing a link with the Russian tradition instilled into the orchestra by former Chief Conductor Mariss Jansons.

Sibelius not only reimagined the structure and grammar of orchestral music at the turn of the 20th century, he was also the first composer to give the Nordic region its own musical language, distinct from the dominant German symphonic tradition at the time. Alongside artist Akseli Gallen-Kallela, Sibelius became a cultural icon in the Finnish Nationalist movement and interpretations of his works are inextricably linked to the distinguished line of conductors who grew up in Finland after the composer.

As a freelance cellist guesting in Helsinkis symphony orchestras, Mäkelä experienced Finlands Sibelius tradition first-hand. I have great admiration for those colleagues who performed cycles before me and I learned precious lessons from those I played under, the conductor says.

Mäkelä studied conducting at the Sibelius Academy with Jorma Panula and cello with Marko Ylönen, Timo Hanhinen and Hannu Kiiski. In addition to his work as Chief Conductor of the Oslo Philharmonic, he is Music Director of the Orchestra de Paris and Artistic Director of the Turku Music Festival. As a guest conductor Mäkelä appears this season with orchestras including the Chicago Symphony, Cleveland Orchestra, Concertgebouworkest, London Philharmonic, Symphonieorchester des Bayerischen Rundfunks and Münchner Philharmoniker.

The album release will be followed by the Oslo Philharmonics first European tour with Mäkelä. In addition to complete Sibelius cycle residencies at the Vienna Konzerthaus and Hamburg Elbphilharmonie, they will perform Mahler at the Paris Philharmonie and join Norwegian soprano and fellow Decca artist, Lise Davidsen, on stage at the London Barbican.

Everything about Sibelius is original. He could make an entire symphony sound like one gesture, one breath...  Klaus Mäkelä

We played, played, played and then recorded. Sibeliuss music, like that of any composer, is a language you have to learn and the circumstances under which we recorded actually played to our advantage.  Klaus Mäkelä

Klaus is only the third conductor to have signed exclusively to Decca Classics in its ninety-three year history, following Solti in 1948 and Chailly in 1978. He is a born conductor: confident, charismatic but also a musicians musician. He has authority without arrogance and a knowledge of the music and sensitivity to the psychology of playing which has won him the respect of orchestras worldwide.  Dominic Fyfe, Label Director, Decca Classics

Under Klaus Mäkeläs baton, Sibelius mysticism of nature appeared more adventurous than I have heard before.  NRK Radio

At the age of just 26, Klaus Mäkelä is chief conductor of both the Oslo Philharmonic Orchestra and the Orchestre de Paris. Now, amid much fanfare, Decca have announced him as only the third conductor to be signed exclusively to the label (the other two were Georg Solti and Riccardo Chailly). His first, keenly-awaited project with Decca is a cycle of the complete Sibelius symphonies, spread across four discs and also including the late tone-poem Tapiola and the Three Late Fragments (thought to be all that survives of a never-realised Eighth Symphony).

Given the quality of the competition in this repertoire, its an ambitious début choice, but one that pays off handsomely. The Sibelius cycle was originally planned as part of a season-long series of concerts, but Covid lockdowns intervened, and so the works were instead recorded during an intense period of music-making from early February to 1 June 2021. We played, played, played and then recorded, says Mäkelä, and the results, captured by producer Jørn Pedersen and engineer Åsgeir Grong in an admirably natural perspective at Oslo's Konserthus with strings somewhat to the fore, are enormously impressive.

The cycle gets off to a terrific start with an elemental account of the First Symphony which, after the plaintive opening clarinet solo, is full of youthful vigour. Mäkelä maximises the textural and motivic character of the music, and the forzandi in the timpani and strings after figure H (and again at figure Y) can rarely have sounded so thunderously apocalyptic, like a force of nature. That feeling of connection to natural powers continues in the Andante which, for all its indebtedness to Tchaikovsky, feels much more forcefully Sibelian under Mäkeläs guidance. Shafts of sunlight distinguish the third movement from Bruckners scherzos to which it is often compared: details leap out vividly, superbly articulated by the Oslo players, and the magic of the interlude-like Lento trio is well caught. The ominous waves which threaten to overwhelm the Finale have a palpable physicality here, and the ending feels both monumental and bitingly chilling.

Theres a similarly elemental feeling to the opening movement of the Second Symphony, which is imposingly granitic yet nevertheless suffused with a warm glow and that tremendous textural depth which characterises all these performances. Since Mariss Jansonss tenure as chief conductor, and most recently under Vasily Petrenko, the Oslo Philharmonic has cemented its place as one of Europes greatest orchestras, and that feeling of innate quality is evident under Mäkelä too. He is careful not to overplay the Life/Death struggles of the Andante second movement, preferring to play the long game, and this movement and the following fleet-footed Vivacissimo are highlights of this performance, while the Finale unfolds with a natural, unforced grandeur that is totally convincing.

In the Third Symphony, the opening theme (marked simply p[iano] by Sibelius) is carefully shaped, and the softness of the more sparingly-scored passages is particularly notable, as are the lightness and agility of the Oslo woodwind section. In the Andantino second movement  which has the character of an extended intermezzo  Mäkelä is not alone in lingering perhaps a little too long over the detail of the gently swinging flute-led main theme, but its so lovingly done that this scarcely matters in the bigger picture. In the final movement, it is again the deftness of the woodwind (together with the telling use of stopped horns) that impresses most, as well as some hauntingly glassy violin pianissimos. The fragmentary nature of the development section is well realised; and the noble concluding theme, first emerging in the violas, grows in power with a steady hand on the tiller and string triplets vibrantly articulated.

The Fourth Symphony is perhaps the most elusive and aloof of the cycle, and here Mäkelä and his orchestra are again at their most impressive. The first movement, featuring a cello solo which seems to direct the emotional focus firmly on the individual, has a gaunt, bleak sonic soundworld, and it is here that the balance of the strings pays its richest dividends, piercingly intense and haunting, while the brass fanfares which momentarily emerge from the gloom sound all the more magnificent. The Largo third movement reveals some extraordinary motivic and instrumental details, and an icy edginess in the upper and middle strings, as well as clear echoes of Wagners Parsifal. Overall, this is one of the most impressive Fourths out there, enticing the listener into a work whose surface  liberally peppered with dissonances that resolve only with extreme reluctance  can often seem forbidding.

Something of the Fourths surface chill also colours Mäkeläs account of the popular Fifth Symphony which, like the Second and the following Sixth, unfolds with an unforced and unfussy naturalness. While the Fifth is a finely-paced account that builds to a majestic climax, the Sixth is again remarkable for that glassy edginess in the strings, allowing the wind  so important in Sibeliuss later symphonies  to emerge with astonishing clarity. And as so often in this cycle it is the care that is taken over motivic and textural detail in the middle movements that is among the performances most impressive aspects.

The symphonic journey proper culminates in a remarkably assured reading of the single-movement Seventh Symphony (split here, as in several other recordings, into four tracks). Here again there is an elemental quality to the music-making, with a sure feel for the all-important underlying pedal points, but also some gloriously sweet playing from flutes and clarinets in particular. The wide dynamic range at times brings Osmo Vänskäs celebrated Lahti cycle on BIS to mind, but theres also an uninhibited feeling of warmth and affection here that marks out this performance as something special. The faster passages are as nimble as one could want without descending into a hectic rush, but it is the opening Adagio section (as well as the glorious close) that lingers in the memory long after the disc has stopped spinning.

A thrillingly engaging account of Tapiola caps the cycle, alert to all the extraordinary inventiveness and variety of colour that Sibelius brings to this late masterpiece, the string tone searingly intense and hypnotic, and the climactic storm once again remarkably icy and penetrating. The Three Late Fragments  totalling just four minutes of music  form a fascinating bonus in Timo Virtanens realisation, though the dimensions (if not the musical substance) are positively Webern-like: one of musics great might-have-beens.

Taken as a whole, this is undoubtedly a young mans Sibelius cycle, with a keen focus on detail and a sure sense of pacing; but the command of orchestral colour is prodigious indeed, and the performances of the First, Second, Fourth and Seventh Symphonies are outstanding by any measure. At Deccas extremely competitive price, this is a cycle that takes its place as the latest in a distinguished array of Sibelius cycles from the label, starting with Anthony Collins and the LSO in the 1950s. It deserves to be heard by seasoned Sibelians and newcomers alike.

So much of the musical energy of these symphonies stems from rhythm and articulation, from a propulsive sense of inevitability, and thats something that Mäkelä has mastered to a fault. He also has a theatrical nose for atmosphere, which is apparent from the moment that desolate solo clarinet at the start of the First Symphony surveys the landscape that will become Sibeliuss enduring musical canvas. ... To a great extent this music finds its own space, and thats the overriding impression that Mäkelä conveys. The evolution of the Seventh is grippingly chronicled, the great trombone orations arriving like stations of the cross. This is the most intimate of epics, kindred spirit to Tapiola, which chills and electrifies here with elemental force. ... An uber-auspicious debut.  Edward Seckerson
Gramophone April 2022