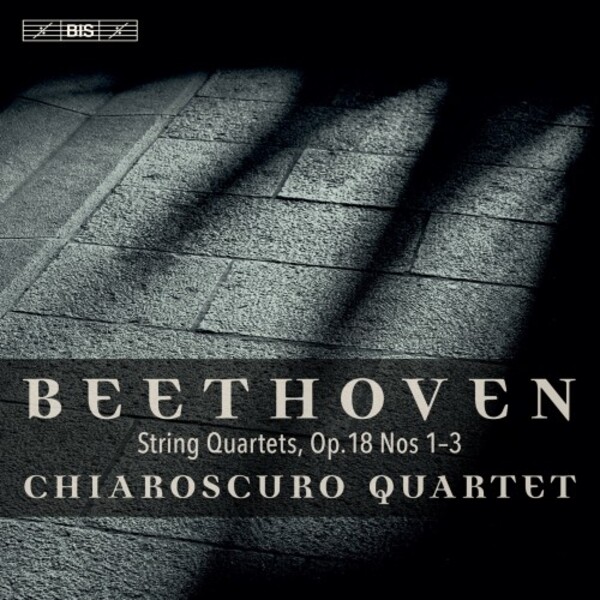 For a string player, Beethovens 16 quartets are of an importance similar to that of his sonatas to a pianist, or his symphonies to a conductor. As a body they form the culmination of all the chamber music composed before them, and to this day they remain a benchmark for every composer of string quartets. The Chiaroscuro Quartet begin their cycle of these works at the same place as Beethoven did, with the Op.18 set which occupied him intensively for the best part of two years (17981800). The effort he put into these quartets was surely due to the fact that he had much to live up to  they would be measured against those of Haydn and Mozart, who had raised the genre to a supreme vehicle for learned taste and subtle, civilized musical discourse.

Beethoven was clearly determined that the six Op.18 quartets should present the widest possible overview of his art. Of the three works included on this first volume, no.1 in F major is the most imposing in scale and the widest in expressive range. In comparison, the Second Quartet, in G major, is more urbane and light-hearted, recreating the spirit of an eighteenth-century comedy of manners à la Haydn. The most lyrical of the set is Quartet no.3 in D major, which despite its numbering was probably the first quartet that Beethoven completed.

When Beethoven moved from his native Bonn to Vienna in 1792, it was  in the words of his friend Count Waldstein  to receive the spirit of Mozart from the hands of Haydn. Beethoven later maintained that he had learnt nothing from Haydn, and indeed his earliest compositional activities in the Habsburg capital were for his own instrument, the piano, often in quite a different, more virtuoso direction from that of the older composer. Yet Beethoven could not forever put off engagement with the genre that Haydn had almost single-handedly raised to the level of the most sophisticated medium for musical cognoscenti: the string quartet. In 1798 he was commissioned by Prince Lobkowitz  dedicatee of Haydns pair of Op.77 quartets  to write a set of string quartets which would become his Op.18. He finished the first three (in the order 3, 1 and 2, to follow their published numbers) in autumn 1799, and the three remaining works a year later.

Had Beethoven stopped writing string quartets after his Op.18 set, we would probably still remember him as a great quartet composer, for these works build on Haydns legacy (and that of Mozart in his own quartets dedicated to the senior composer) to create something new, fresh and invigorating, initially following classical templates, but bursting with new ideas, striking harmonic shifts, sudden dynamic surprises and formal twists  in short, all the hallmarks of Beethovens own steadily emerging individual style. The first three quartets may be less adventurous in formal terms than numbers 4 to 6, but in the striking new recording from the Chiaroscuro Quartet they emerge as fresh and invigorating as they must have sounded to their earliest audiences.

This disc follows a series of Haydn and Schubert discs that the Chiaroscuro Quartet (comprised of Alina Ibragimova and Pablo Hernán Benedí, violins, Emilie Hörnlund, viola, and Claire Thirion, cello) has already released on the BIS label. As with those recordings, they use instruments and bows set up in the Classical style, with bare gut strings and sparingly deployed vibrato. Though not the first ensemble to adopt this approach on record in these works, the Chiaroscuros are, in terms of both technique and musical insight, the leaders in the field. The glassy sheen of their tone, the unanimity of attack, the luminous transparency of the textures, the variety of bow-strokes, and the brilliance of nuance they bring to fortepiano and sforzato markings, all make them ideal interpreters for this music, setting them apart from the competition (period instrument or not).

Beethoven knew what he was doing when he opened the published set with the F major Quartet  the largest in scale and the most arresting of the set. Its first movement, thematically saturated with the vividly-profiled opening idea, bustles along under the Chiaroscros hands; there is sweetness to their inflection of the second subject, yet the underlying energy never slacks. In the second movement, an Adagio affettuoso ed appassionato based on the tomb scene from Shakespeares Romeo and Juliet, the tone ranges from the duskily plangent to the bitingly intense, while the forte outbursts in the boldly contrasting Scherzo have rarely sounded so thrillingly. The skittish demeanour of the tumbling triplet figuration in the concluding Allegro is tossed off as if it were the most natural thing in the world, and the ringing sonorities of the instruments enhance the exultant feel of the works close.

Compared with the First Quartet, the Second (in G major) is urbanity itself, yet the extra edginess of the gut string energises this music too. The extravagant first violin embellishments of the Adagio are marvellously eloquent, and the surprising central Allegro episode of this movement starts teasingly under-tempo, with Ibragimova making an accelerando before her colleagues join in. The Scherzos Trio is a special delight here: the first violins harmonic-like top C and exchanges between second violin and cello are particularly successful. The Allegro molto, quasi Presto finale bursts with good humour.

The D major Quartet, placed third in the published set but first to be composed, has charms of its own in the Chiaroscuros performance, from its gently ethereal opening and the warmth of the B flat major Andante con moto to the subtle inflections of the Allegro third movement (neither minuet not scherzo, as Richard Wigmore points out in his excellent booklet notes) and the sparkling, comical and sometimes boisterous concluding tarantella which sets the seal on this magical performance. With an ideal chamber ambience achieved by producer Andrew Keener and engineer Fabian Frank in the Sendesaal, Bremen, the disc is 76 minutes of pure joy, and leaves us keenly anticipating the next instalment!