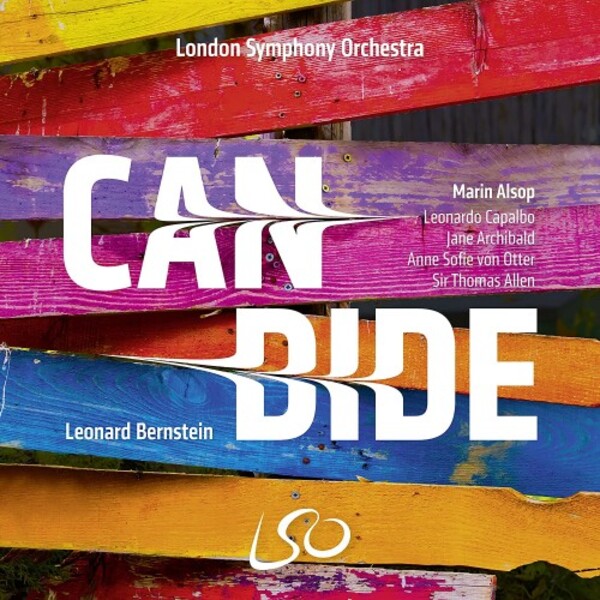 The best of all possible productions - The Telegraph

The rhythms snapped and crackled, the colours were bright and the energy didnt flag - The Times

A hundred per cent irresistible - Bachtrack

Combining Voltaires witty Enlightenment satire of religion, politics and culture with Leonard Bernsteins affectionate, exuberant tribute to European music in all its rich variety, Candide has long been among Bernsteins most popular works. Composed in initial collaboration with playwright and author Lillian Hellman at the height of the McCarthyite anti-Communist era (both Bernstein and Hellman were listed in the notorious Red Channels of supposed Communist sympathisers), it had a less than successful opening run of just two months on Broadway from December 1956 to February 1957, but the original cast recording did much to rescue the musics reputation. Numerous subsequent productions brought extensive revisions, with a string of authors and lyricists from Hugh Wheeler and Richard Wilbur to Stephen Sondheim and John Wells all making contributions. A Scottish Opera production of 1988 prepared by John Mauceri served as the basis for Bernsteins own definitive operatic version, performed with a starry cast and the London Symphony Orchestra at the Barbican Centre in December 1989, with an audio recording made a few days later with the same forces.

Almost three decades later, in December 2018, Bernstein protégée and champion Marin Alsop led the LSO at the same venue in two semi-staged performances as part of the Bernstein centenary celebrations, and they serve as the basis for this new issue from the LSO Live label. Alsop herself, together with stage director Garnett Bruce, prepared this new version of a work that has had almost as many iterations as productions (in this respect, Candide stands as a quintessentially theatrical operatic work), but with Bernsteins own final version, including his refinements to the orchestration, as the clear basis.

Captured in excellent sound (with Surround Sound option on these hybrid SACDs), this is almost as starry an affair as Bernsteins DG recording, with Thomas Allen in the duo role of Narrator and the optimist philosopher (and Candides mentor) Dr Pangloss, tenor Leonardo Capalbo in the title role, coloratura soprano Jane Archibald as Cunegonde (the object of Candides steadfast affections), and mezzo-soprano Anne Sofie von Otter as The Old Lady (a role previously taken by such legends as Irra Petina and Christa Ludwig). With huge experience of Bernsteins music to her credit (her Naxos collection of orchestral works was one of the centenary years highlights), Alsop leads a performance that is vibrant, lively, engaging, buoyant and yet fundamentally lyrical, very much in the mould of Bernstein himself. She secures playing from the LSO that combines refinement, subtlety, richness and incisiveness in ideal measure, alive to all the myriad stylistic debts that inform the dazzling score.

Thomas Allen makes an excellent Narrator, and knows exactly when to transfer from heavily-laden irony to sincerity, in a libretto where the dividing line between satire and genuine emotion is sometimes very fine. As Candide, Capalbo has a fine lyrical voice, sensitively coloured yet with enough power to carry above the orchestra, and his more reflective numbers (such as his Act 1 Lament) are exquisitely delivered, while his stamina sustains him through what is the works most substantial vocal role. Jane Archibalds Cunegonde is outstanding, and her account of Glitter and be gay is absolutely spectacular (any applause from the audience has been discreetly removed), suppressed emotion alternating with stunning, pinpoint coloratura. Anne Sophie von Otter has a high time as The Old Lady, unaffectedly grand and enjoying the opportunity to deploy a variety of accents in her set-piece tango I am easily assimilated; she need fear no comparison with her celebrated predecessors in the part.

Minor roles are all taken with aplomb (notably Carmen Artaza as Paquette and Marcus Farnsworth as Maximilian), but the other real stars of this performance are the London Symphony Chorus (in excellent, enthusiastic and beautifully-shaded voice) and the LSO themselves, whose infectious, vibrantly colourful playing conjures up the shifting locations and predicaments of Candides adventures more vividly than any staging ever could, with particularly splendid brass and percussion contributions. By the end of the performance (and notwithstanding a very few minor missteps in the dialogue), the cumulative effect is enormously touching, and Bernstein himself appears to reveal his true self (after all his mercurial musical mask-changing) in the closing Make our garden grow, which builds to a thrilling a cappella climax.

Even if they already have Bernsteins own DG recording (or, indeed, the original Broadway cast recording), opera, operetta and musical lovers will want to add this to their collection as one of the most consistently engaging and finely recorded performances now available, with every word clearly audible, every detail of the remarkable score hitting home. Enthusiastically recommended!