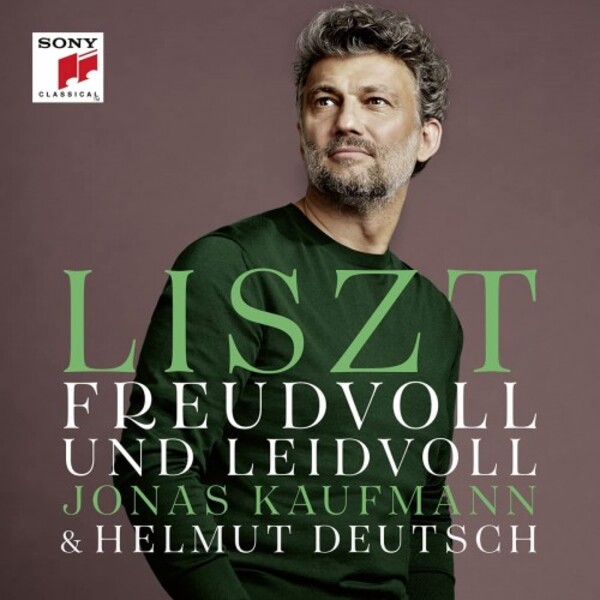 The new album from globally acclaimed superstar tenor Jonas Kaufmann. On Liszt - Freudvoll und Leidvoll, he joins forces with pianist Helmut Deutsch to perform a programme of songs by a largely neglected lieder composer, Franz Liszt.
After their album Selige Stunde, Jonas Kaufmann and Helmut Deutsch used the lockdown necessitated by the coronavirus pandemic to make a further series of recordings. Their second album of songs is devoted to Franz Liszt, a composer for whom both feel a special affinity and whose music has long featured in their shared concert career. The album title taken is from one of the Lieds (songs) titles, meaning joyful & sorrowful.
Together with a group of six other songs including Vergiftet sind meine Lieder, Der König von Thule and Ihr Glocken von Marling, the demanding Petrarch Sonnets have been a part of Jonas Kaufmanns repertory for many years, while Loreley, O lieb, solang du lieben kannst and Es muss ein Wunderbares sein are among his regular encores.
Im very pleased that our enforced rest made this album possible  under normal circumstances it would probably not have come into existence quite so quickly Kaufmann says of the album. As a result we were able to record not only those Liszt songs that we had already tried out in the concert hall but also a number of others that until now have been overshadowed by Liszts great hits.
One of the worlds most acclaimed operatic tenors, Kaufmann has been described by The New York Times as ""a box-office draw, and... the most important, versatile tenor of his generation. Helmut Deutsch ranks among the finest, most successful and in-demand song recital accompanists of the world, and is particularly known for his lieder accompaniment, having been described as a truly outstanding interpreter of Liszt.