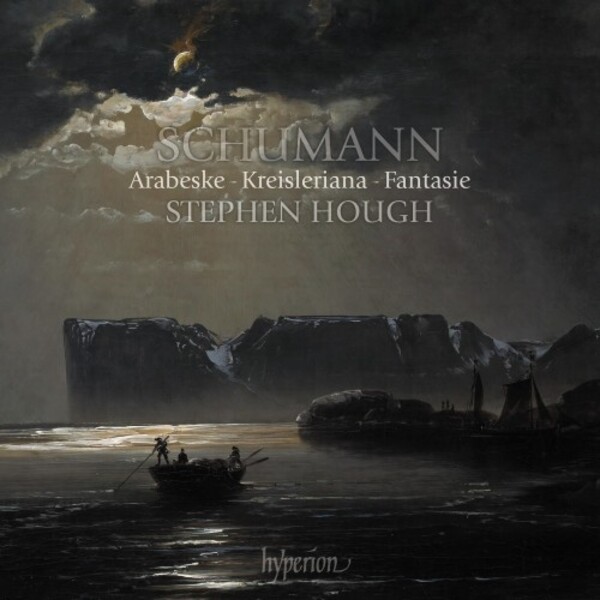 The emotional sweep of these marvellous works, reflecting the vicissitudes of Schumanns complex personal life at the time, calls for a pianist wholly responsive to their fervent Romanticism. The artistry of Stephen Hough proves ideal.

For the grand sweep and headiness of its emotion, the vividness of its contrasts and the demanding nature of its technical brilliance, Robert Schumanns early piano music is hard to beat. The three works on Stephen Houghs latest Hyperion disc  his first all-Schumann recording for many years  all date from the late 1830s (when his prospects with his future wife Clara Wieck were far from certain), and they remain among the most popular of all his works. Informed as much by his literary aspirations as by his own ambitions as a pianist, they present formidable expressive as well as technical challenges to even the greatest pianists, inhabiting a world poised between fantasy and reality, in which the public and the private overlap, and moods range from the euphoric to the profoundly introverted.

Stephen Hough clearly relishes the demands of this mercurial, quintessentially Romantic repertoire, and as the distinctively Schumannesque harmonic turns of the op.18 Arabeske ring through the speakers, it is already evident to the listener that this disc is very special. Its not just that Houghs performance has all the necessary fluidity of truly great Schumann playing, but that the weighting of the various lines, the dynamic range, and the contrasting emotions (sometimes within the space of just a few bars) are all well-nigh perfect, yet without ever losing sight of the musics larger shape and form. Schumann was fundamentally a miniaturist, but within those forms he dealt with big ideas and emotions, and Hough never forgets this fact. The pause before the Arabeskes dreamlike final bars is a case in point: stretched just long enough to suggest that this could be the start of a new piece, but not a second longer  so that their actual status as a magical afterthought, a transformation of the main theme, is confirmed.

Based on the fictional musician Johannes Kreisler in the writings of E.T.A. Hoffmann, and reflecting his vividly extreme characteristics, Kreisleriana was dedicated to Chopin, who was said only to have commented favourably on the design of the title page! This sequence of eight highly individual pieces of varying lengths is as illustrative of Schumanns own extremes of mood as it is of Hoffmanns eponymous creation, and with Hough as our guide we get the full measure of the works extraordinary range of expression. In the opening number, the torrents of triplet semiquavers immediately draw the listener in, while in the second the two intermezzi that punctuate the main musical flow are brilliantly set off, with a nicely rhetorical placing of the cadence at the end of Intermezzo II, and another magical postlude.

The galloping outer sections of the third movement are infectiously agitated, while its central passage is luminously dreamy. In the fifth number, Hough expertly highlights the teasing points of imitation, surely a tribute to the counterpoint of the Baroque masters. The sixth is another rapt slow movement, and again Hough brings a special intensity to its closing bars.

As for the virtuosic seventh movement, the outer sections are a miracle of dexterity, fabulously articulated, with a warm glow to the slower closing bars that form a bridge to the final number. Here theres an elfin charm to the skipping compound rhythms over the ominous, spectral countermelody in the bass, while the rich tenor lines of the alternating section are shaped with evident relish and care; the admirably wide dynamic range, evident throughout the recording, is especially telling here, and it caps a performance of rare distinction.

The disc closes with a magnificent performance of the great Fantasie in C major, intended to raise funds for a Beethoven memorial, but actually inspired by Clara, and dedicated on its publication to Liszt, who suggested the title in preference to the original Grand Sonata. A highly distinctive three-movement form (fast-fast-slow), with a particularly fantastic opening movement, a march-like second, and an exquisitely inward close, show Schumann at his most original even with the shadow of Beethoven in the background. Hough once again impresses with his mastery of contrast, the refinement but also the boldness of his shaping, and his grasp of detail as well as overall shape. It culminates in one of the great readings of the closing movement, where the worlds of Beethoven, Schumann and Chopin all seem to merge in fruitful fluidity. Its a marvellous close to an outstanding disc which should be heard by anyone with an interest in the Romantic piano repertoire, and is yet another brilliant addition to Houghs extensive discography. The recording, made in Londons Henry Wood Hall in April 2020 during the first weeks of lockdown, is well up to Hyperions high standards.