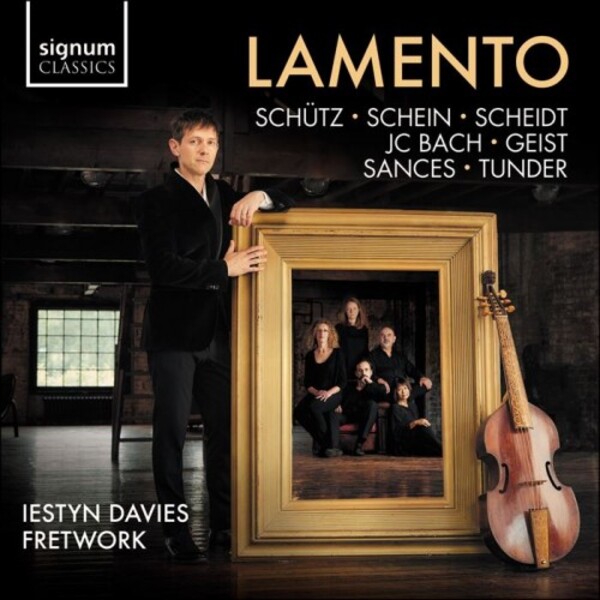 Countertenor Iestyn Davies and the viol consort Fretwork present a new recording of works for viol consort and voice, drawn from 17th-century Germany, following their critically praised 2019 album of works by Michael Nyman and Henry Purcell.

Featuring performances from organist Silas Wollston and countertenor Hugh Cutting, the recital ranges widely over the 17th century - from the early years with three curiously similar sounding friends: Schein, Scheidt and Schütz, to the most significant member of the Bach family before Johann Sebastian, Johann Christoph Bach.

From there they travel down the North Sea to the foothills of the Alps, including Buxtehudes predecessor at the Marienkirche in Lübeck  Franz Tunder (whose daughter Buxtehude he was to marry)  and another north German composer who worked in Copenhagen, Christian Geist.

Giovanni Felice Sances is an outlier here: he was born in Rome but spent the second part of his life working for three successive Emperors in Vienna, where viol playing was still very much in vogue.

In 2021, Fretwork celebrate their 35th anniversary. In the past three-and-a-half decades they have explored the core repertory of great English consort music, from Taverner to Purcell, and made classic recordings against which others are judged. In addition to this, Fretwork have become known as pioneers of contemporary music for viols, having commissioned over 40 new works.

Iestyn Davies is a British countertenor widely recognised as one of the worlds finest singers, celebrated for the beauty and technical dexterity of his voice and intelligent musicianship. Critical recognition of Iestyns work includes two Gramophone Awards, a Grammy Award, a RPS Award for Young Singer of the Year, the Critics Circle Award and recently an Olivier Award Nomination. He was awarded the MBE in the Queens New Years Honours List 2017 for services to music.

Star countertenor Iestyn Davies already boasts and impressive recorded repertoire ranging from Dowland, Purcell and Handel to Fauré and Adès. His excellence in the German Baroque repertoire was evident on his award-winning 2017 Hyperion disc of cantatas for alto voice by JS Bach. For his latest release, on the Signum label, he teams up with the renowned viol consort Fretwork  celebrating its 35th anniversary this year  with a disc of music for voice and viols by earlier generations of German Baroque composers.

The bulk of the music here is by three composers born within two years of one another and with famously similar surnames: Heinrich Schütz (1585-1630), Johann Hermann Schein (1586-1630) and Samuel Scheidt (1587-1654). Together they form the backbone of the German baroque repertoire in the 17th century. The disc opens, however, with a work by another German, Franz Tunder (1614-1667): his Salve mi Jesu is an adaptation of a work by the Venetian Giovanni Rovetta (c. 1595-1668) to a new text, and to a new accompaniment by viols. It sets the tone for an exceptionally involving programme, with Daviess voice floating in gloriously above the instruments.

The first purely instrumental item is Scheidts Canzon super O Nachbar Roland, a series of variations for consort with continuo support (discreetly yet stylishly supplied by keyboard player Silas Wollston). It culminates in a final variation featuring shimmering tremolo, a real ear-catcher.
Then comes an extended lament for alto voice by Johann Christoph Bach (1642-1703), the leading member of the Bach clan before Johann Sebastian, much admired by the latter and his son Carl Philip Emmanuel. Listening to this Lamento, you can hear why: it has wonderfully deep, expressive harmonies, and some highly effective word painting  falling melismas at fliessen mit Wasser (flowing with water) and a telling semitone inflection at mein Herz ist betrübt (my heart is troubled).

Two suites from Scheins Banchetto Musicale (Musical Banquet) of 1617, including expansively expressive Paduans (i.e. pavans) and a splendidly catchy Allemande in suite no.14, bookend a number from Schützs Geistliche Chor-Music (1648), Auf dem Gebirge. This is another lament, taken from St Matthews gospel (itself a quotation from the book of Jeremiah). Two alto voices intertwine to devastating effect, with Hugh Cuttings countertenor beautifully matched and balanced with Daviess.

A much lesser known figure is Christian Geist (1650-1711), a North German who was active in Scandinavia. His Es war aber an der Stätte is a Passion-like narrative and strophic meditation on the entombment of Jesus following the Crucifixion, with the viols adding real expressive depth to the movingly articulated words sung with great clarity and feeling by Davies. Its just a shame that the booklet couldnt make room for more than the first verse of Johann von Rist's chorale text, as this is a real jewel of a piece. Tunders An Wasserflüssen Babylon (By the waters of Babylon) continues the theme of lamentation, in a performance of deeply meditative qualities.

Scheidts Canzon super Cantionem Gallicam brings some welcome brightness at just the right point, lightening the mood ahead of the sweet-toned O dulce nomen Jesu by Giovanni Felice Sances (1600-1679), a composer of Roman birth who joined the Imperial court in Vienna in 1636, rising to the rank of Kapellmeister for the last ten years of his life. The line-by-line musical meditation on this traditional liturgical text is highly effective, eliciting singing and playing attentive to every nuance.

The programme ends with Scheins setting of Luthers well-known chorale text Christ unser Herr zum Jordan kam, another work for two alto voices, one voice presenting the melody unadorned, while the other incorporates virtuosic decorations, and the two are often entwined together. Its a marvellous display piece, and it makes for a splendid close to a completely absorbing disc of German Baroque pearls. Captured in warm but well-focused sound at The Apex, Bury St Edmunds in July 2020, and with engaging notes by bass viol player Richard Boothby, this is a disc that should grab the attention of all lovers of Baroque music, shining a revealing light on German music of the seventeenth century.