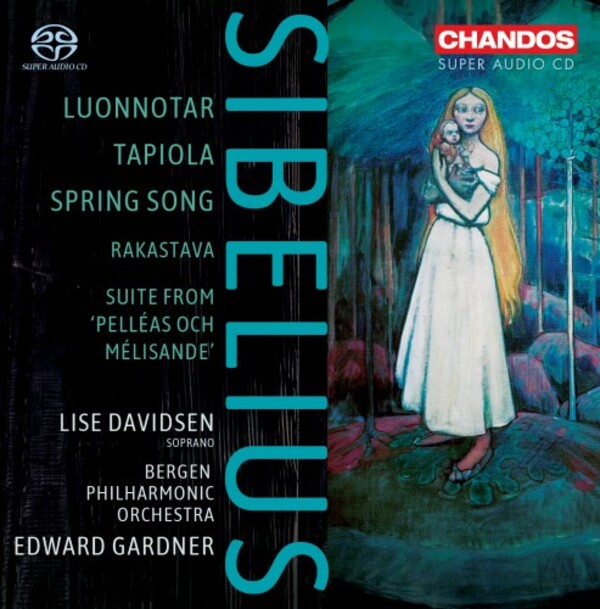 Following their acclaimed recordings of Schoenberg with Sara Jakubiak and Brittens Peter Grimes with Stuart Skelton, Edward Gardner and the Bergen Philharmonic turn their attention to the music of Sibelius. Written in 1913 for the diva Aino Ackté, the tone poem Luonnotar draws on text from the Finnish national epic poem, the Kalevala. Its virtuosic demands are ably met here by award-wining soprano Lise Davidsen, who also features in the Suite from Pelléas and Mélisande, music reworked by Sibelius from his incidental music written for the first performances of Maeterlincks play in Helsinki, in 1905, in Swedish. The tone poem Tapiola, from 1926, is Sibeliuss last great masterpiece and evokes the forests of his native Finland. The programme is completed by a pair of much earlier works, Rakastava (The Lover) and Vårsång (Spring Song). The album was recorded in Surround Sound and is available as a hybrid SACD.

Over the past decade, Edward Gardner has built up an impressive discography on the Chandos label, from Elgar and Britten to Szymanowski and Lutosławksi. Since becoming principal conductor of the Bergen Philharmonic in the 2015/16 season, he has added critically-acclaimed series of titles devoted to Janáček, Schoenberg and Bartók, as well as an impressive disc of Grieg (the Piano Concerto and Peer Gynt). Now, four years after his first foray into Sibelius (songs and orchestral works, featuring Gerald Finley) he returns to the composer with an equally enthralling programme, headed by two of the Finns greatest tone-poems, Luonnotar (1913) for soprano and orchestra, and the late masterpiece Tapiola (1926), as well as the much-loved Suite from Pelléas and Mélisande (1905). Gardner, in partnership with his Bergen forces, shows himself to be a natural and perceptive Sibelian, relishing the evocative textures and matchless scoring while never losing sight of the big picture, whether the mythic Nordic landscape or Maeterlincks symbolist drama.

The star attraction here is the young Norwegian soprano Lise Davidsen, who has been attracting rapt reviews whenever she appears, whether live or on disc, her stunningly powerful yet gorgeously expressive voice hailed as a once-in-a-lifetime musical vehicle. In Luonnotar, Sibeliuss mysterious, compelling setting of the creation myth from the Finnish national epic the Kalevala, she sounds majestically aloof, in a way that suggests the timelessness of the narrative rather than any secular superiority. As she sings of the eponymous Water-Mother, and of the scaup that lays a wondrous egg which, upon breaking, forms the earth and its firmament, it is with an expansiveness (without sluggishness) which suggests that the narrator herself could be the divine being who shapes these events. And yet she brings a pained intensity to the scaups exclamation No! No! No! as it seeks a nesting place before alighting on Luonnotars raised knee. With superbly nuanced playing from the Bergen orchestra, this is a profoundly atmospheric account of this uniquely potent work, and Davidsens lustrous voice is fully at the service of the Finnish text while at the same time bringing an extra dimension to the narrative.

The performance of Tapiola is just as involving: Sibeliuss beguilingly monothematic exploration of the realms of the Forest God Tapio needs to combine detachment, earthiness, mystery, magic, a hint of danger and, finally, solace. If Gardners performance lacks just the last ounce of enchantment (Sibeliuss epigram to the score speaks of wood-sprites in the gloom weaving magic secrets), the command of sonority and the emphasis on the elemental (epitomised above all by the musics crucial underlying pedal-points) are spot on, and the stormy climaxes are savage in their impact. There is no sense of stage-managed spotlighting, yet the antiphonal division of the violins, with seconds on the listeners right, opens up many facets of the accompanimental writing, as if lit by laser-like shards of sunlight from the low northern horizons. The final major-key benediction to this relentlessly minor-key work comes not as a sudden transformation, but as a totally natural consequence of what has preceded it: the forest as shelter and friend. Gardners pacing is superb, neither too hurried nor languorous, and the dynamic range and spatial depth (particularly noticeable if you have Surround Sound facilities) are remarkable. This ranks with the finest accounts of Sibeliuss final masterpiece (still with three decades of life left to him!) in recent years, reason enough in itself to hear the disc.

The perceptiveness that Gardner and the Bergen orchestra bring to these two late works spills over into the rest of the programme. In the Suite from the incidental music to Pelléas and Mélisande, countless telling details bring extra dimensions to the music: the double basses sul ponticello and the tutti strings harmonics in At the Seashore, and the biting offbeat of the insistent viola Gs in Mélisande at the Spinning Wheel. The wonderfully jaunty Entracte makes the poignancy of Mélisandes Death all the more powerful, while the Suite opens with splendidly rich string tone in At the Castle Gate, and Davidsen makes a welcome cameo appearance in The Three Blind Sisters.

By placing the two earliest works last in the running order, Gardner is able to hint at just how they prefigure the mature Sibelius. In Rakastava (The Lover), scored for just strings and minimal percussion, the finest details of the scoring are endowed with remarkable expressivity: the ice-cold ppp string figuration in the opening movement, the sorrow-tinged minor-key episodes in the second, and above all the ominous pedal-notes in the closing Farewell. To close the disc, the early Spring Song (dismissed by Mahler as The quite usual kitsch!) is affectionately shaped without attempting to make more of it than it is. It serves here rather as a palette-cleanser, as a way of bringing the listener gently out of the spells that have been cast over the rest of the disc, rounding off an album that should delight Sibelians everywhere.

Gardners Tapiola is less bleak and brooding than some readings, but still fabulously atmospheric, and hes equally convincing in evoking the mysterious atmosphere of Luonnotar, in which the soloist is the current flavour-of-the-month among dramatic sopranos, Lise Davidsen...  Andrew Clements
The Guardian 1 July 2021