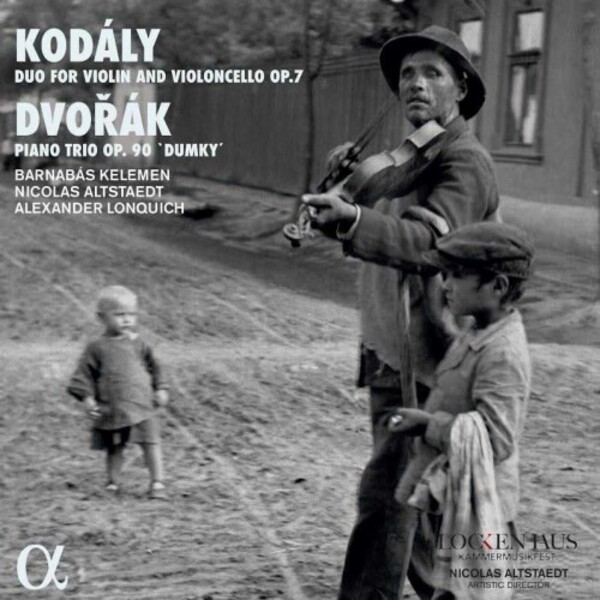 Duo for violin and cello, op.7

Duo for violin and cello, op.7

After the success of the recent recording of works by Veress and Bartók, which won both a Gramophone Award and a BBC Music Magazine Award in 2020, the Lockenhaus Festival series, curated by its artistic director Nicolas Altstaedt, continues its journey through central Europe with Antonín Dvořák and his famous Dumky Trio, named after a genre of Slavonic folksong generally performed by blind wandering minstrels who accompanied themselves on the kobza or bandura (twelve-string lute). Dvořák, whose father played the zither, immersed himself in this music and creatively translated its substance into his own music. The trio was premiered in 1891 and, in response to its ecstatic reception, Dvořák decided to perform it during his grand farewell tour before leaving for the United States. Zoltán Kodálys Duo for violin and cello (1914), which completes the programme, also bears witness to the influence of folk music.

Two years on from their award-winning recording of chamber works by Veress and Bartók, violinist Barnabás Kelemen, cellist Nicolas Altstaedt and pianist Alexander Lonquich return with a similarly compelling album of music by Kodály and Dvořák. Made under the auspices of the Lockenhaus Festival, of which Altstaedt is artistic director, it pairs Kodálys intense Duo for violin and cello with Dvořáks wistfully beguiling Dumky Piano Trio. In some ways the musical language of these two works, their composition separated by over three decades, seems worlds apart, yet they are both rooted in Slavic folk music, and the blazingly committed and often earthy playing on this disc emphasises those shared roots while bringing out the distinctive qualities of each, so that by the end of the performance the coupling seems wholly natural.

Kodálys Duo was composed in 1914 as war was looming, and the weight of the times seems to colour each of its three movements in some way or other. The opening movement, marked Allegro serioso, ma non troppo, immediately grabs the listeners attention with its extravagant opening gestures before settling into a modal, folk-infused idea more typical of the composer. Yet there are insistent, troubling gestures, like the flickering ricochets that flitter about the main melodic line, or the sinister patter of pizzicato ostinatos, leading to a tormented outburst first on violin, then on cello. Needless to say, Kelemen and Altstaedt bring huge energy and depth of tone to this music. The underlying anxieties come to the surface in the central Adagio, both in the fragility of its opening section and in the desperate pleas from the violin in the more urgent Andante sections. This is big music of tremendous feeling and intensity  often akin to the world of Janaceks string quartets, but with just two players producing an equivalent amount of expressive tension  and each movement seems to contain a world in itself.

Nowhere is this more apparent than in the third movement, which opens with an extended violin cadenza with punctuating support from the cello before transitioning into an urgent, defiant Presto, bristling with virtuosity and culminating in a thrilling if hard-won close. Kelemen and Altstaedt are right on top of this music, getting into its every pore, and suggesting that this is a work that deserves to be held in the same regard as the Sonata for solo cello that followed immediately afterwards in the composers catalogue of works. Its certainly difficult to imagine it performed with greater technical aplomb or expressive involvement.

Alexander Lonquich joins proceedings for Dvořáks Dumky Trio (1882), a highly original piano trio in six movements each of which offers a different take on the dumka genre: a folk-style elegy with alternating slow and fast sections. Dvořák had used the dumka elsewhere in his works for single movements, but the idea of grouping six of them together was an inspired one by a composer at the top of his game  the work was composed shortly before Dvořák departed for his celebrated sojourn in the United States. The dumka is a distinctly Slavic genre with Ukrainian roots, but here it is combined with palpable Czech influences, as well as that peculiarly lyrical bent that Dvořák seems to have inherited from his enthusiasm for Schubert. And indeed Schuberts well-known penchant for major-minor alternation, mirroring as it does the slow-fast speed alternations of the dumka, is never far away in these miniature masterpieces.

To create a coherent multi-movement work from a succession of what are essentially elegies takes a special kind of genius, but Dvořák (who described the work, with Brahmsian dryness, as something small, miniscule in fact) succeeds triumphantly, putting this Trio on a par with the quartet version of Haydns Seven Last Words. As with the Kodály Duo, this is a performance of enormous commitment steeped in the folk background to the music but also technically superb, with glorious depth of tone and variety of colour. And here again each movement seems to contain a world in miniature. Among the highlights are the stark, unharmonized soliloquies of Dumka no.3, the mesmerising tread of no.4, the striking change of tone  chest puffed out, as it were  of no.5, and the pianos folk-style recitative against a cello tremolo, with intermittent echoes from the violin.

Although the dumka seems to have originated in the lute-playing of blind itinerant musicians, it is endowed here with something approaching an orchestral palette, yet never forgetting the musics essentially mournful, nostalgic nature or the dance-like lilt of the contrasting faster sections. This trio are experts at slipping slyly, suggestively from one tempo to another, and with inflecting the rhythms with just enough buoyancy to suggest the hint of a smile on a weather-battered, careworn face.

Theres a welcome bonus in the form of the original, much more straightforward version of Dumka no.3, while Altstaedts extensive notes on the Dvořák, including poetic associations, deep background research and all sorts of fascinating tangents, is required reading, while Kelemen provides his own personal reflections on Kodálys Duo. Caught in splendid, warmly reverberant sound, this is chamber music of an extremely high level, a fascinating coupling, and music that  like so much folk-influenced art  seems to reach right to the depths of the soul. Resoundingly recommended!