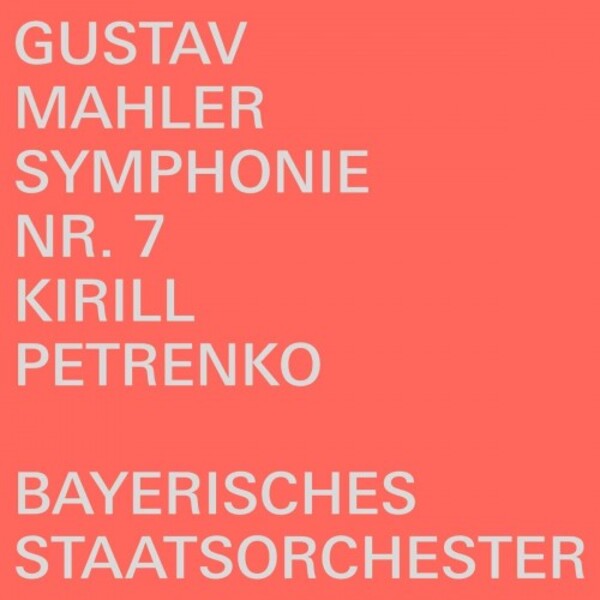 Symphony no.7 in E minor

Symphony no.7 in E minor

Kirill Petrenko, general music director of the Bayerische Staatsoper from 2013 until 2020, conducts Gustav Mahlers Symphony no.7  a pinnacle of the symphonic repertoire in a dramatic interpretation.

High-quality features including an extensive booklet and appealing haptics.

If it seems strange to you that the first release from the Bavarian State Operas new own label is a Mahler symphony  and one of the purely instrumental ones at that  its worth remembering that Mahler was best known in his lifetime not as a symphonist but as the leading opera conductor of the day. Working in the demanding surroundings of an opera house, with all its collaborative (and often competitive) talents, teaches musicians valuable lessons, not least the importance of balance and timing  crucial skills which can inform concert performances as well. Few conductors today are as steeped in the operatic milieu as Kirill Petrenko, who before being appointed chief conductor of the Berlin Philharmonic had spent important periods as Generalmusikdirektor of Berlins Komische Oper (20022007) and the Bavarian State Opera in Munich (20132020). Indeed his Munich years, though relatively brief, are already regarded as something of a highpoint in the ensembles recent history, compared by some to the heady years when Carlos Kleiber was a regular guest conductor with the ensemble (though Petrenko's repertoire has generally been more adventurous, more willing to introduce works from outside the standard repertoire).

Like Kleiber, Petrenko knows how to get the best out of the keen, alert playing of the Bavarian State Orchestra (the State Operas pit band which also determines its own concert programmes), and the vitality that informed Kleibers Beethoven performances with the orchestra (captured in varying levels of sound quality on a famous series of discs on the Orfeo dOr label) is evident here in this stunning live performance of Mahlers Seventh Symphony from May 2018. The Seventh has traditionally been seen as the most problematic of Mahlers symphonies, a five-movement structure which for the most part is coloured by shadowy, nocturnal elements working their way from B minor through E major, C minor, D minor and F major, but finishes in a blaze of C major glory characterised as either crude or sardonic. Yet, as several landmark recordings have shown over the years (Kondrashin and Bernstein chief among them), when performed with conviction the Seventh can be one of the most characterful and convincing of all his symphonies, the concluding work in a trilogy of purely instrumental pieces that form the centrepiece of his symphonic output.

Petrenkos view of the Seventh is a bracing one, with brisk speeds close to Kondrashins, though with better-disciplined wind playing and less wayward brass than in the latters Leningrad Philharmonic recording. And, where Kondrashin can sometimes sound rushed, skating precariously (and often thrillingly) across the pages of the score, Petrenko knows how to dig into the textures, bringing out the richness of the harmony so that even at its most elated nothing feels hurried. Though it hasnt the last ounce of sheen of some of the great European orchestras, that is no bad thing in this of all Mahlers symphonies, and it certainly has tonal depth as well as subtlety of shading in all departments.

According to Mahler, the Symphonys opening rhythms came to him in a moment of inspiration while being rowed across an Alpine lake, yet they also have a bittersweet edge that has a not-so-distant relation in the opening of Schuberts Rosamunde Quartet. Listening to the way Petrenko points the dotted figuration of the Symphonys slow introduction (accompanying the famous tenor horn solo), one gets a tremendous sense of coiled energy that is then unleashed in the ensuing Allegro risoluto. The anticipation of the nocturnal second and fourth movements in the first movements development section is absolutely magical, yet there is a constant sense of purpose and momentum, a refusal to get entangled with the detail, that ensures attention never flags.

In the first Night Music, the telling major/minor juxtapositions (carried over from the Sixth Symphony) are perfectly weighted, as is the layering of the varied orchestral voices, closely observing Mahlers detailed dynamic markings in this fantasy-like transformation of a march, more poised, less bitingly sardonic than in some rival accounts. Yet how the bassoons and clarinets seem to relish their moment in the spotlight towards the movements close!

It is in the central Scherzo  surely the spookiest music that Mahler ever penned  that both Mahler and Petrenko give vent to the most cruel humour, but this nightmare transformation of a Viennese waltz still has a dance-like pose to it, the lower instruments sounding ominous even when animated, while the movements fractured, disintegrated close is brilliantly negotiated. What a contrast, then, with the second Night Music, with its impassioned violin solos, serenade-like instrumentation (guitar, mandolin and harp well balanced without feeling spotlit), and exquisitely delicate closing pages that maximise the impact of the Finales invigorating opening. This is indeed a symphony of stark contrasts, and Petrenko knows exactly how to bring them to the fore while maintaining a forward thrust and a view of the long expressive line that preserves the musics coherence. The works first audiences found the Finale bewildering: was it mocking the Emperor Franz Josephs diamond jubilee, which the Prague premiere was supposed to be celebrating, or was it a send-up of Wagner, whose Meistersinger Prelude (a then ubiquitous concert item) concluded the programme? As with Iván Fischers recent Budapest Festival account of the work, Petrenko instead relishes the sheer morning-joy of the music; perhaps because of the relatively close-up recording on the stage of Munichs Nationaltheater, this new recording feels more inside the music, somehow inhabiting its every pore yet at the same time never getting bogged down.

After experiencing this performance, one is left with the strong impression that Petrenko is a completely natural Mahlerian: nothing feels contrived or stage-managed, yet everything is in its place and the emotional investment and commitment is total  and he takes the orchestra along with him like few have others since Carlos Kleiber. Handsomely packaged as a CD-shaped hardback book of some 70 pages, with high quality paper and binding, and a fine, detailed recording, this is a thoroughly auspicious start to this new venture, as well as one of the most urgently involving recent additions to the Mahler discography: a Seventh that rates highly even alongside the greatest recordings of the past.

I really thought I knew this work  every facet of it. But Kirill Petrenko has a way of hearing deep into textures and harmonies that is at times really quite startling. ... This is an auspicious first release for the Bayerisches Staatsorchesters own label and whichever favourite version of the symphony you might have in your collection ... Petrenko demands to be heard and attention paid.  Edward Seckerson (Recording of the Month)
Gramophone August 2021