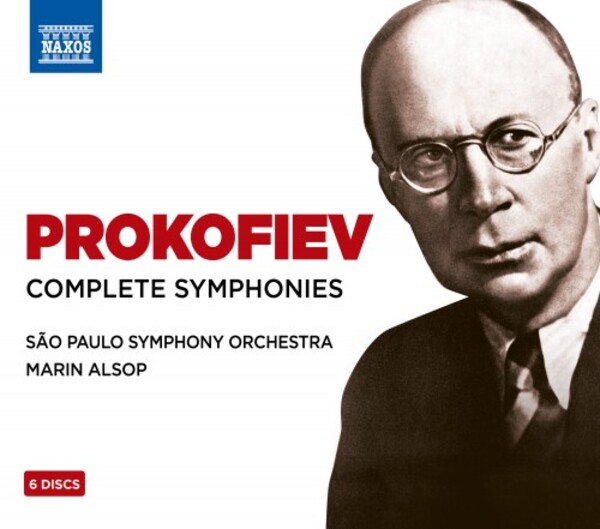 Sergei Prokofievs seven symphonies are acknowledged as one of the major cycles of the 20th century, and these recordings with Marin Alsop and the São Paulo Symphony Orchestra have received widespread critical acclaim. From the crisp vitality of the youthful Classical Symphony to the viscerally exciting Third, the Fifth Symphony which for Prokofiev represented the grandeur of the human spirit, and the deeply moving and heartfelt Sixth Symphony, this is an unforgettable collection crowned by the bitter-sweet Seventh Symphony, the composers final significant work.

Marin Alsops achievements as a conductor have made her an inspiring and powerful voice in the international music scene. Her recordings for Naxos are too numerous to name, but this acclaimed Prokofiev symphonic cycle joins her acclaimed 8-disc set of the orchestral music of her mentor Leonard Bernstein (8508018).

Each single-disc release of this Prokofiev Symphonies edition received wide critical acclaim. Of Symphonies nos. 1 & 2 (8573353), Gramophone wrote that Alsops temperate Classical Symphony has many delightful touches  the finale has just the right kind of fizz and sparkle. The American Record Guide on the Third Symphony (8573452): breathtaking  both the performances and the sound Along with everything else Naxos is now also an audiophile label!

The Fifth Symphony (8573029) was described as an outstanding achievement by BBC Music Magazine, who also wrote of the Sixth (8573518) that the recording balance is outstanding and the playing of the São Paolo Symphony is exceptionally fine.

With the Baltimore Symphony Orchestra, Marin Alsop has also recorded the complete ballet score to Prokofievs Romeo and Juliet (857353435), in an intense, voluptuous and pliant account according to The Guardian.