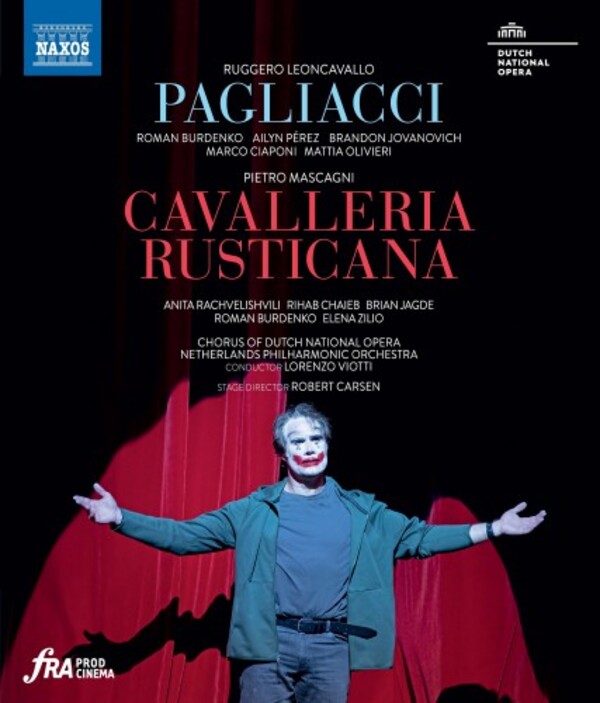 These two pinnacles of Italian opera, Pagliacci and Cavalleria rusticana have it all  love, infidelity, betrayal, jealousy and murder. Both are classic examples of verismo operas that dramatise the lives of ordinary people: Pagliacci fuelled by the tension between everyday life and the aesthetic world of the stage, Cavalleria rusticana juxtaposing unbridled passion with profound faith. Robert Carsens widely acclaimed 2019 production plays a masterful game of theatre-in-theatre, avoiding clichés and calling into question the nature of reality.

Pagliacci and Cavalleria rusticana are two entirely separate one-act operas, but tradition has made them one of the most famous double-bills in the history of opera. Cavalleria rusticana is usually placed first, but director Robert Carsen has flipped this tradition by opening with Pagliacci, and this is by no means the only feature of this production that makes it stand out from the crowd.

Filmed in September 2019, this Dutch National Opera production was received with wide acclaim: It was an exciting night at the opera. Three leading American singers were making their Dutch National Opera debut and powerhouse mezzo Anita Rachvelishvili her much-anticipated return. From the first lines of the prologue, sung with dash and finesse by baritone Roman Burdenko, he gets you involved with the characters, all superbly acted.

After conductor Sir Mark Elder was obliged to cancelLorenzo Viotti, who is poised to succeed Marc Albrecht as chief conductoragreed to step in on very short notice. Viottis interpretation is as fresh and atypical as Carsens staging, and as a team they confer a new outlook on these venerable classics  hopefully there are more collaborations between them in the future  (operacanada.ca)