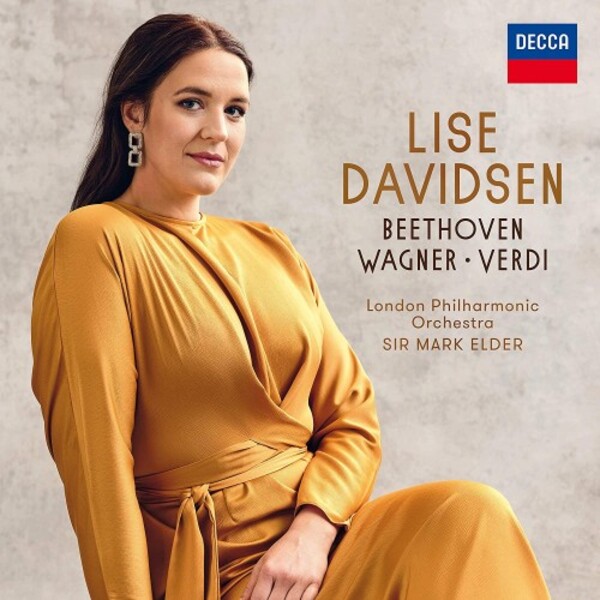 Lise Davidsens second album explodes from the speakers with Leonores aria from Fidelio, the role which bowled over critics in March 2020: She will surely be the outstanding Leonore of the next generation (★★★★ Financial Times). Presenting some of the great operatic heroines from the German and Italian repertoire: Verdis Leonora from La forza del destino, Cherubinis Medea, and Santuzza in Cavalleria rusticana further demonstrating her versatility. Featuring Wagners five Wesendonck Lieder which has become a signature piece for Lise and which affords us a glimpse of her future Isolde. Recorded in lockdown with the London Philharmonic Orchestra and the doyen of British opera conductors, Sir Mark Elder.

Voices like hers come round once in a generation.  ★★★★ Financial Times

The voice of the century.  ZDF Heute Journal

A God-given instrument, used with sensitive artistry. To hear it alone is worth the price of any ticket.  ★★★★ The Daily Telegraph

One of the greatest vocal talents to have emerged in recent years, if not decades.  Gramophone

It might now seem like an eternity ago, but in March 2020, just as the full force of the Covid-19 pandemic was being felt, the stellar young Norwegian soprano Lise Davidsen was mid-way through a run of Fidelio performances at the Royal Opera House, Covent Garden. Even though the production was suspended mid-run, Davidsens once in a generation voice and striking stage presence  which have drawn comparisons with Callas, Nilsson and Varnay, among others  had made this the hottest ticket in town. Now, happily, on only her second solo album for Decca (a first was devoted to Wagner and Richard Strauss), wider audiences can savour a snapshot of her Leonore, in the form of the heroines Act 1 scene Abscheulicher!. It forms the explosive opening number of a collaboration with the London Philharmonic under Sir Mark Elder recorded in August and October 2020 that spans the Classical and Romantic eras, from Beethoven to Verdi and Wagner. Throughout it all, theres that powerhouse voice, steely-edged à la Nilsson but with greater warmth, a huge range, and seemingly limitless dynamic nuance, that have seen this young artist showered with superlatives wherever she has appeared.

There are few conductors working today with Elders knowledge and experience of the art of operatic accompaniment, and he and the LPO are in excellent form right from the word go. Sparks fly immediately in the opening bars of Abscheulicher!, with strings on their mettle and Davidsen at her most imperious, but her expressive capabilities are really shown in the aria itself, Komm, Hoffnung, where theres a radiance that must have sent a tingle down the spine of anyone lucky enough to hear Davidsen in the theatre; the LPO horns excel themselves in their bracingly optimistic calls, a reminder that this ensemble is also the pit band for Glyndebourne. The concert aria Ah! perfido, to a text by Metastasio, inhabits a slightly earlier aesthetic (To me theres something here of Mozart meeting Cherubini, says Davidsen), but theres that same steely intensity in her performance, in a big-boned performance that takes no hostages, slipping effortlessly between classical elegance and full-on passion.

This leads neatly into Dei tuoi figli la madre from Cherubinis Medea (in the customary Italian version familiar from Callas rather than the French original), where Davidsen perfectly captures the intense hurt felt by the heroine at Jasons betrayal, as well as the frightening inner resolve that will culminate in the operas later horrors. Its a role that Davidsen has sung on stage, and it shows in this thrilling account.

The focus then shifts to the later 19th century, with Santuzzas Voi lo sapete from Mascagnis Cavalleria rusticana, an achingly heartfelt performance that has one longing to hear more of Davidsen in the Italianate repertoire, and with a welcome cameo appearance from Rosalind Plowright, no less (herself a notable Medea in the past), as Lucia. Two Verdi extracts, Leonoras Pace, pace mio Dio! from La forza del destino and Desdemonas show-stopping Ave Maria from Otello, provide further evidence of Davidsens ability to capture a characters vulnerability, yet whether in Leonoras searing cry of Fatalità! or the hushed prayerfulness of the Ave Maria, one senses that neither of these characters in this singers hands would be the pushover they can sometimes seem with lesser voices.

Finally to the composer whose music Davidsen seems most destined for  Wagner  though shes sensible in pacing herself before taking on the more taxing heavyweight roles too early in her career, however well she might handle them now. With this in mind, she finds the ideal medium for the moment in the five Wesendonck Lieder: expressively expansive yet (most importantly) intimate in scale, even in their orchestral guise, and nowhere more so than in the gentle opening number, Der Engel. The second song, Stehe still!, is grippingly turbulent, while in Im Treibhaus you can feel the dead weight of humidity in music that eventually found a home in the bleakness of Act 3 of Tristan. Davidsen and Elder bring out the pre-echoes of Strauss in the epigrammatic Schmerzen, while the pulsating strings and the overall sense of stillness in the concluding Träume mark this performance as very special indeed. As throughout this disc, its the sheer range of Davidsens voice that leaves the listener struck dumb: its rich, creamy lower notes, its alert, pliant mid-range, and its soaring upper register. And the LPOs playing in the Wagner in particular recalls the heady days of Klaus Tennstedts conductorship: that sense of Wagnerian style evidently lives on in the collective memory, and in them Davidsen has the ideal musical partners.

Theres a short but typically sensitive note from John Allison, clearly based on an interview with Lise Davidsen herself, and full texts with translation. The recordings, from Londons Henry Wood Hall and the Watford Colosseum, capture the voice to perfection, with just enough detail to the orchestral balance not to distract from the voice (and this is a voice that needs no favours from the balance knobs!). Unmissable, above all, for the Beethoven and Wagner that frame the disc, and tantalising for the Italian numbers, this second solo album from Ms Davidsen arguably exceeds the promise of her first. A must for all opera lovers!

The soprano switches gears for the final third of the album with Wagners five Wesendonck Lieder, songs he composed while working on Tristan und Isolde. ... For many listeners these performances will be the albums chief attraction, since Isolde is a role Davidsen plans to take on in a few years. Judging by her luminous singing here, it will be worth the wait.
The Independent

Leonores aria is one of the highlights of this disc, sung with impeccable technical control and a gleaming beauty of voice. [Beethovens] concert aria Ah, perfido!, cut from the same cloth, goes well alongside. ... For all who are looking forward to her future in Wagner, it is the Wesendonck Lieder that are the raison dêtre of the disc. Thoughtfully accompanied by conductor Mark Elder and the London Philharmonic Orchestra, and beautifully recorded, this is a rewarding performance  not yet individual, but well-schooled, radiant, full of promise.  Richard Fairman
Financial Times 26 March 2021

Ill be 34 by the time its released, Lise Davidsen says in the booklet for her second solo album, so please dont typecast me yet as a Wagnerian! Well, the superbly poised and moving account of the Wesendonck Lieder that concludes the programme makes it difficult not to, but the Norwegian soprano here shows other strings to her bow, offering a more varied calling card than on her debut album of Wagner and Strauss. ... another fine album from an artist who, quite simply, is one of the greatest voices to be heard today.  Hugo Shirley
Gramophone April 2021

If [Lise Davidsens] Wagner and Strauss disc two years ago confirmed her position as a rising star of extraordinary potential, this consolidates it. ... Davidsens soprano has a brighter gleam and greater expansiveness than that of any other singer to have emerged on to the opera scene in the last decade. Shes not a singer to signpost every moodswing; listen closely, though, and her attention to detail and to the colour of her sound is telling... Davidsens voice may be big but it doesnt hold you at a distance; it draws you in.  Erica Jeal
The Guardian 1 April 2021