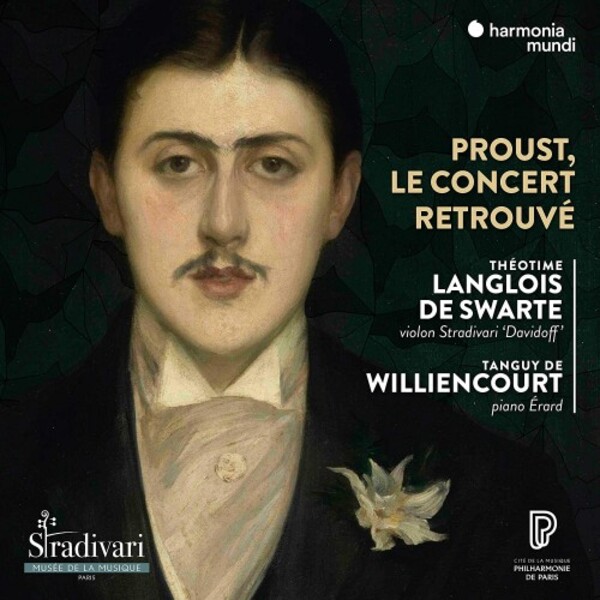 On 1 July 1907 Marcel Proust invited a few of his friends to a private concert he was hosting at the Ritz Hotel. In a letter he wrote two days later to the composer Reynaldo Hahn, the host described the eclectic nature of the programme.

Composers of his day were featured side by side with the masters of the past and of more recent date: Fauré, Wagner, Schumann, Chopin and Couperin.

In recreating the recitals wide range of periods and styles, Théotime Langlois de Swarte and Tanguy de Williencourt also revive the intimacy of the Parisian fin-de-siècle salons and transport us into the fertile musical universe evoked in the pages of Prousts novel, In Search of Lost Time.

Few works are as suffused with the atmosphere of an era as Marcel Prousts monumental In Search of Lost Time. This affectionate but often bitingly satirical seven-volume semi-autobiographical tribute to French society life of the late 19th and early 20th centuries is also a reflection on memory and the loss of time. It forever established Proust as (in Graham Greenes words) the greatest novelist of the 20th century. Teeming with cultural references, it demonstrates its authors exceptionally heightened artistic sensibilities, including his receptiveness to the music of his time. No wonder, then, that many of todays musicians are keen to pay their own tribute to Proust this year, on the occasion of the 150th anniversary of his birth (and next years centenary of his death). And, unsurprisingly, it is the French label Harmonia Mundi that has come up early with surely one of the most rewarding discs, a partly hypothetical reconstruction of a soirée organised by Proust on 1 July 1907 at the Ritz Hotel in Paris.

In collaboration with Pariss Musée de la Musique, whose instruments they play, violinist Théotime Langlois de Swarte and pianist Tanguy de Williencourt present a sumptuous musical feast at whose centre is the music of Gabriel Fauré, a composer deeply revered and admired by the young Proust. (Already in 1897 the young Proust had written to Fauré, I know your work well enough to write a 300-page volume about it.) The great composer himself was to have been the main attraction at the recital, but he had to withdraw at the last moment; nevertheless, his Violin Sonata and Berceuse remained the main items on the programme, and they are likewise on this disc, together with the immortal Après un reve in an arrangement for violin and piano, and the Nocturne no.6. Around these works, Langlois and Williencourt weave a selection of works that reflect Prousts concerns with the diachronic nature of music: its origins and trajectories, from the Baroque to his own time. So, alongside two items by Prousts lifelong friend and some-time lover Reynaldo Hahn, we find Schumann and Chopin (both of whom, in Prousts view, laid the foundations for French music of the late 19th century), as well as the inescapable Wagner: Isoldes Liebestod in the celebrated piano transcription by Franz Liszt, and  from a much earlier era  François Couperins magical Les Barricades mysterieuses from the second book of his Pièces de clavecin.

You couldnt wish for more persuasive champions of this repertoire than Langlois and Williencourt, the former playing the Davidoff Stradivarius, recently restored by Balthazar Soulier of Atelier Cels  brightly-lit but with great depth of tone; the latter on a half-sized 1891 Érard ideal for this repertoire, with a nutty mid-range  and exquisite definition in the upper register. Right from the outset, in Hahns strikingly neoclassical À Chloris with its pseudo-Bachian walking bass, the duo immerse the listener in the soundworld of the era with undisguised relish. Williencourt gives the Érard plenty of opportunities to shine, firstly in Des Abends from Schumanns Op.12 Fantasiestücke and Chopins Raindrop Prelude, where the clarity of the bass-line in the central section is a distinct bonus.

Then comes a passionate performance of the Fauré Sonata, the first movements scurrying piano figuration leaping off the page, the violins rising split-octaves cutting through the air with rapier-like swagger. If Prousts 1907 gathering heard a performance anything like this, they must have been utterly transported: an Andante that spans haunting depth and vivid sunlit vistas, with a steady underlying momentum, and a Scherzo whose pointillist staccato bursts with energy (another instance of the Érards many advantages over a modern concert grand). The Finale seems to encapsulate all the works varied moods, before its good-humoured conclusion. And then onto a beguiling rendition of the Berceuse, the muted violin producing a marvellously cloaked sound, the piano accompaniment swaying gently, with a hint of sensuousness.

Couperins Barricades serve as an enchanting interlude, sounding as idiomatic on the Érard as they would on an authentic French harpsichord, so inimitably Gallic are they. Faurés Après un reve is meltingly gorgeous, the violin line velvety-smooth, the tread of the piano crystal clear while never threatening the violins primacy, the rubato shaded to perfection with hand-in-glove unanimity. The Nocturne is a performance of startling immediacy, very present even as it conjures up its night-time vision; the filigree figuration of the central section is executed with a deftness that anticipates the mood  and attention to detail  of the Impressionists, culminating in climax that seems to have almost orchestral resonance. That same expressive range is deployed to very different effect in the Wagner-Liszt Liebestod, whose crashing opening has a unique impact when played on the Érard, as does the multi-stranded polyphony that follows; Williencourt scales the heights of passion not despite but because of the instruments carefully circumscribed and weighted sonic characteristics, offering (like the disc as a whole) a masterclass in the benefits of period style. And finally, Hahns LHeure exquise from his Chansons de grises perfectly lowers the emotional temperature before the audience departs, while bringing the programme round full circle.

This is a disc both for those for whom Prousts seven-volume chef doeuvre remains too daunting a prospect, and for those who know Proust and want to further immerse themselves in his world, and specifically its musical backdrop. And, happily, theres also a complementary disc from cellist Steven Isserlis on BIS entitled Music from Prousts Salons, accompanied by Connie Shih on a modern Steinway, which offers, alongside immersive performances of sonatas by Saint-Saëns and Franck, different Fauré and Hahn items, as well as fascinating rarities by Henri Duparc and Augusta Holmès. Those feeling like treating themselves (and who doesnt these days?) will want both; if Lenten austerity is a factor, however, the added character of the Musée de la Musique instruments probably clinches things in favour of the Langlois-Williencourt disc. Both are rich in insight and evocative power: simply grab a tasse de thé and a petite madeleine, and press the play button!