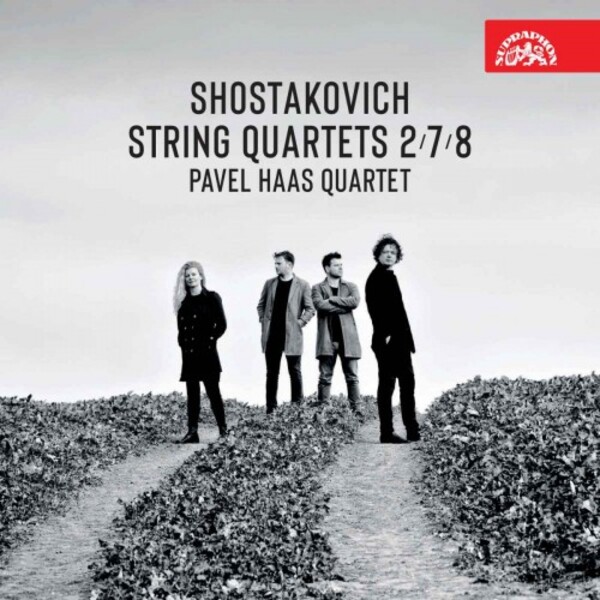 Shostakovich  his music is a challenge each and every quartet sooner or later has to face up to. Yet when it comes to the Pavel Haas Quartet, it seems to be in their very DNA. The ensembles unbridled, impulsive and, now and then, frenetic energy, sense for extreme contrast, ability to bring to bear gradation from breath-taking subtlety and tenderness to symphonic drama are facets essentially incident to Shostakovichs music.

Although composed in safety, away from the horrors of World War II, String Quartet no.2 (1944) reflects the suffering, uncertainty and anxiety of living at the time (the lyrical Recitative of the second movement, as performed by Veronika Jarůková, the first violin). Both dating from 1960, String Quartets nos. 7 and 8 are truly intimate confessions. While Shostakovich dedicated the former (the shortest piece of the cycle) to the memory of his first wife, he most likely intended the latter as his own epitaph, at the time when be hovered on the thin line between life and death. Attesting to the autobiographical nature of String Quartet no.8 is the opening DSCH motif, Shostakovichs musical signature, which reoccurs throughout the piece.

The phrase self-recommending is often used too readily for recordings in these days of technical and sonic perfection, but just occasionally there are releases that justify the epithet, where technique, recording and fundamental musicality come together in perfect harmony. And that certainly applies to two dazzling new releases of Shostakovich string quartets from two groups playing at the peak of their game.

On the Supraphon label, the Pavel Haas Quartet have won for themselves an enviable reputation in the Czech repertoire from Smetana and Dvořák to Janáček and Haas, but they have visited the Russian quartet tradition tradition before in the shape of Prokofiev. For their eagerly-awaited first recording of Shostakovich they couple the A major Second Quartet of 1944 with two works from 1960, the Seventh and Eighth, the latter perhaps the greatest and certainly the most popular of all Shostakovichs works in the genre. They clearly relish the four character pieces that make up the Second Quartet: the Overture with its clear echoes of the Fifth Symphony, the solo violin Recitative of the second movement framing its central, lyrical Romance, the ghostly Waltz with its angrily spiky Trio, and the final, folk-infused Theme and Variations. Yet they are equally at home in the deceptively concise Seventh Quartet in F sharp minor, energising the opening, unmistakably Shostakovian Allegretto, tracing the spectral outlines of the central Lento with immense sensitivity, and then bursting forth to grasp the third movements opening Allegro with biting intensity before opening out again for its concluding, wistful Allegretto, with just the right hint of nostalgia.

The PHQs formidable combination of almost orchestral depth of tone with mercurial, chamber-music responsiveness lies at the heart of their success in the C minor Eighth Quartet. This is a performance of real weight and incisiveness which nevertheless finds plenty of room for the intensely personal nature of the music. The dynamic and expressive range is vast, the Allegro molto second movement grippingly fast but fool-blooded, the following Allegretto sardonic, eminently dancelike but never merely flippant, the fourth movement as unforgettably powerful in its outbursts as it is magical in its quieter passages, the closing Largo, like the opening one, expertly poised and emotionally intense. Among modern recordings of this work, this PHQ account stands head-and-shoulders above the rest, and the whole disc, expertly recorded in Pragues Domovina Studio, and complemented by booklet notes from pianist Boris Giltburg, himself an expert on Shostakovichs music, is likely to acquire classic status.

Nor should any serious admirer of Shostakovichs string quartets overlook the 50th anniversary recording from the Fitzwilliam String Quartet (see here). Viola player Alan George is the only surviving member of the groups original line-up, but he provides a direct link to the composer himself: his vivid and extensive booklet notes for the FSQs remarkable new accounts of the last three string quartets (1970-74) include reminiscences of the ensembles contacts with Shostakovich, including a lovely photo of Shostakovich and George together in York. The musicians themselves may not have Russian or Slavic pedigree, but their playing is steeped in knowledge of the Russian tradition, and their playing in these works, which they were among the first to champion in the West, with the composers blessing, has a unique authority and tradition behind it. Their complete cycle on Decca remains a benchmark, but their latest thoughts on these late masterpieces are unmissable, showing an even greater depth and responsiveness, every phrase and note, every percussive stroke, carefully weighted, every tempo inflection and nuance of phrasing brilliantly judged. Few other groups uncover quite so much variety or subtlety of inflection in the bold succession of Adagios that make up what turned out to be Shostakovichs final quartet, the Fifteenth. But this is a group as much at home in Haydn as it is in Shostakovich, and that depth and breadth of experience stands them in excellent stead here, as do Philip Hobbs production and engineering skills for Linn Records. Just as much as the PHQ single disc, this 2-disc set is required listening for any lover of this music. Self-recommending indeed!

...  they make interpretive decisions that are unexpected but none the less to me felt deeply initiative and this passage showcases the gorgeous cello line that has extraordinary shaping in how you hear them just briefly melt away and then return. Really intelligent attention to detail.
Record Review (BBC Radio 3) 21 January 2023

The wonderful Pavel Haas Quartet perform three of Shostakovichs here: the wartime No 2, a powerfully reflective response to the suffering and anxiety of the time, rigorously and sweepingly argued; the short No 7, written in memory of his first wife, its mix of sweet memories, turbulence and soulful lamentation affectionately captured; and the harrowing No 8, a paean to tragedy and anger, presented here as a crunching finale to this engrossing disc.  Ken Walton
The Scotsman 29 October 2019